Share All sharing options for: On Glenn Dorsey, Bobby Petrino, and blowing 21-point leads in basketball

Sorry for the absence. We've got some downtime till the big game and I needed to really buckle down on my actual job. Oh real world, how you intervene.

So, we've had Les get his contract extended to 2012, which I think most of us are fairly pleased with (especially given the results of the poll we conducted); but then he spoke to Michigan, only to tell 'em he's staying with us. I have no idea what to think of this, nor will I prognosticate (like that?), but I don't think anyone would be wise to take anything as the gospel truth until Michigan officially names someone else as coach. For the record: clearly Les thus far has been a FAR classier individual than, say, Bobby Petrino (see below), but so has Britney Spears. But who the hell knows what could happen next?

The awards have been piling in for Glenn Dorsey: Lombardi, Outland, Lott, and Nagurski. Meanwhile, he's on every All American team imaginable (and kudos to Steltz and Highsmith for getting 1st and 2nd team AP All American honors, as well).

The Advocate's Sam King wonders if he's the best DT LSU has ever seen. It's an impressive list (hell, even the last decade alone produced all time greats like Booger McFarland, Chad Lavalais, Claude Wroten, and Kyle Williams), and I don't think there's any doubt he's at the top (two-time All-American? Come on, it's no contest.).

I'll say this much: I'm taking a helluva lot of flak about LSU from just about every random college football fan I meet. While they all acknowledge Dorsey's injury has meant something, not a damn one seems to realize just how ridiculously good Glenn Dorsey really is. 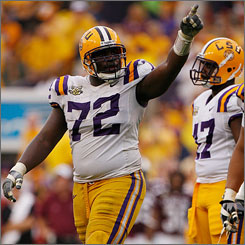 I was on last week's CFB Weekly radio show discussing the madness of the Michigan coaching rumors and our berth in the national title game.

I think even the vast majority of the Saban-hating LSU populus (of which we are not a member, we're part of the "Saban's still okay but Bama sucks anyway" populus) would have to agree that we now have an even more monumental prick in our division. Bobby Petrino, kick 'em while they're down why don't ya? I'm certain every big name recruit will take your word when you tell them that you'll be there to see them through all four (er, three) years of their careers. Anyway, Geaux Saints for destroying that rat bastard in his final game with the Falcons, and now as a Saints fan I have to say, as much as I hate the Falcons I can't help but feel sorry for the franchise's fans. I won't wish them success, not while we share the division, but I do wish 'em SOMETHING better ahead. Good riddance to bad rubbish, and I'll love LSU beating the tar outta the Hogs henceforth (although it might be difficult if Petrino actually does manage to get some talent with which to work). Anyway, head over to The Falcoholic for their grumblings over the whole ordeal.

I would say something about the basketball team's horrific blown 21-point lead with 8:30 left against 'Nova, but I actually turned off the game not long after we got to that 21, so I can't constructively comment. Scott Rabalais has some advice.