Share All sharing options for: The aftermath, 2007 Tigers vs 2003 Tigers, Miles, basketball woes

I certainly do feel bad for the rest of the nation outside SEC country in that they're going to have to deal with all the retarded folk who use the title game as yet another example of OMGLOLWTF SEC domination of the whole universe!!!!11!!!1!!!

We'll try to keep it levelheaded here; and in my pregame commentary I was in no way trying to merely be conservative in picking the Tigers 14-13, I honestly had no belief whatsoever that we could put up six scoring drives on the best CFB defense in years. The argument that "they haven't played anyone" more or less rang hollow after Kansas put Va Tech away in the Orange Bowl; and yes, I know any ACC game in the BCS should be chalked up to the opponent, but still...I'm still flabbergasted.

And the consensus got it right. When we were up 38-17, I found myself thinking "My god, the average message board imbecile got it right." Well, whatever. You'll never hear me complaining. One of our regular commenters got pretty close with a 31-17 prediction over on SMQ's page. So hats off, crep!

(While you're over at SMQ, check out his great "Chain-link victories" post today, showing things like how the transitive property of victories can lead to Grinnell over LSU.) 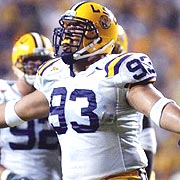 Anyway, I participated in the last CFB Weekly Podcast of the season. We discussed the title game and I was asked to pick the winner if the 2007 Tigers took on the 2003 title team. Not sure about you folks, but I'd give that one to the 2003 squad. Miles has proven plenty, and I probably owe him an apology for some heated commentary after the Ar-Kansas game, but in the end I just trust a Saban-coached squad more at this point. Now, give Les a month to prepare for that game and I suppose he could pull out even with anybody, so who the heck knows. But that 2003 defense was tremendous, led by DT Chad Lavalais (pictured, right, courtesy USA Today), Marquise Hill, Marcus Spears, Corey Webster, etc. etc. etc.

Anyway, you can get the 2007 stats HERE and the 2003 stats HERE. Do the comparison yourself. Rekindle those memories of 2003 yourself. Then tell me who you think would win? This year's offense was obviously the best we have ever put together, so I'm sure it'd be close, at the very least.

Catch the video of Les on the Best Damn Sports Show here.

In basketball news, our SEC Opener did not go so well, as we lost 61-39 to Mississippi State. We shot 14-66 (21%) from the field. What's the opposite of "superlative"? Because I wouldn't have enough to describe John Brady's coaching ability. I don't know if they closed the dozens-of-pages-long "Fire John Brady" thread on TigerDroppings, but the sentiment's still there.