It's an interesting conglomeration of choices this week for the And The Valley Shook SEC Offensive Skill Position Player of the Week Award.  Since players for teams that play patsies are automatically out, we need only consider a few games to find our man:  Ole Miss @ Florida; Tennessee @ Auburn; Arkansas @ Texas; Mississippi State @ LSU; Alabama @ Georgia.

Percy Harvin had a great day for Florida, netting 268 yards combined rushing and receiving along with 2 touchdowns.  But, he also fumbled.  And lost.  Tim Tebow had 319 yards passing and 2 rushing touchdowns, but he lost too.

Shaye Hodge had a huge play for an 86 yard touchdown catch for Ole Miss, but only made 3 catches on the night.  Uh, morning.

Neither Auburn nor Tennessee had a player generate any impressive yards or points.

Arkansas lost by 42 points, so we need look no further at that game.

LSU had some players with some nice nights, but it's hard to pick out a truly outstanding performance.

Alabama sure looked impressive, but no one really poured on the stats.

So without further ado, our And The Valley Shook SEC Offensive Skill Position Player of the Week is... 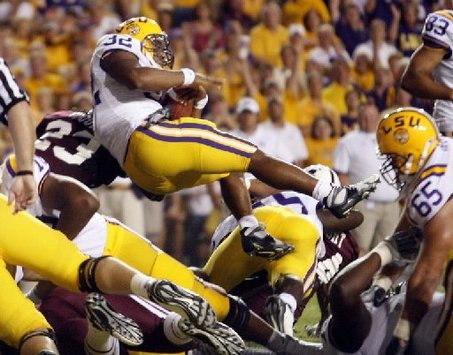 LSU running back Charles Scott.  His 141 yards rushing and his pair of 1-yard rushing touchdowns paced LSU and moved the chains consistently and effectively.  He never broke a big one, but he averaged over 5 yards per carry and put points on the board, once on 4th and goal.

On Saturday, Charles Scott padded his lead in the SEC rushing race.  He's averaging 134 yards per game.  Second place is averaging 98 yards per game.  Of all the backs in the league, only Knowshon Moreno has put the ball in the end zone more, and he's had one extra game in which to do it.

In 27 carries, only twice was Scott held to no gain or to a loss.  He just kept moving forward, and his solid runs kept us mostly out of 3rd and long situations, and gave our young quarterback a good chance to have success.

This week's honorable mention goes to the recipient of the first ATVSSECOSPPOW, Alabama's John Parker Wilson.  His numbers don't scream at you, and he only attempted 16 throws, but his 80% completion rate and his 12.8 yards per attempt average make him more than worthy of consideration.