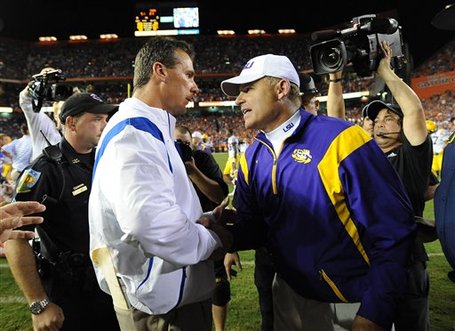 I too hate losing to Urban Meyer, but this is football.

Alright, guys.  Anyone who thought we were going to the National Championship game undefeated this year was fooling himself.  This is a team that we knew all along had weaknesses.  We knew that Jarrett Lee had minimal experience, and that Andrew Hatch had limited talent.  We knew that our defensive backfield would be green.  We knew, if we were paying attention, that this is a team that had the ability to win any game it was in, but needed to be perfect to win some of them.

And we know, if we know football, that no team is perfect every time out.

I think it is possible that this can be a learning experience for a young team.  If they're paying attention, they know they can't coast.  They know they can't out-talent the better teams in the conference reliably.  We have to match their talent, and beat them with execution and hard work.

The key is to move on.  Learn the lessons of this bad loss, and then put it behind us.

If there is one characteristic that has marked the Les Miles era, it is resilience.  Within games, the team does not give up.  It does not get down when it is behind.  It keeps playing.  Last night, we made a game effort for about one full quarter, dispersed between the second and third quarters.  But it was not to be.

Now it is time to see if we can evoke that resilience when it's not a bad quarter we need to overcome, but a bad game.  We have to have short memories not just within a game, but between games.  It's something we've never had to do before, at least not like this, but we've proven adept at one aspect of recovery.  We just have to be good at the other as well.

LSU still controls its own destiny in the conference, which is the true goal of every season.  Sometimes, after winning the conference, you are fortunate enough to have a chance to win the national championship, but you cannot rely on that or look for it, or you will almost surely be disappointed.  The conference championship is within all teams' reaches at the start of the season, and it is still within ours.  We need only to win our games, and they are all winnable if we play to the best of our ability.

Granted, in order to win our games, we will need to make some improvements, particularly on pass defense.  It is hard to ignore or dismiss that 3 teams have had field days against our secondary, and that two of those teams have been unable to be productive against other teams.  I do not know if it is a personnel problem or a scheme problem, but something needs to be corrected.

I hate a lopsided score against us as much as the next person, but we have to take a long range view of these things.  The season continues, and all of our goals are still in reach.  The team must shake off negativity and progress, starting against South Carolina next week.