Share All sharing options for: Week 7, Around the SEC, Part 2 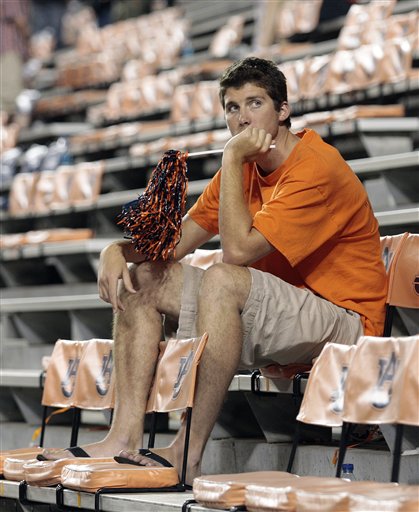 Are the young people generally wearing flip flops these days?  Also, it's good to know that we did not suffer the greatest disappointment of the week in the SEC.

Auburn's season is taking a turn towards the disastrous.  In this one, the offense was no better, and the defense failed them, allowing 416 yards of total offense.

Arkansas has been able to move the ball all year, but has generally stalled out when getting into scoring position.  And this game was really no different.  Arkansas moved at will, but committed 3 turnovers, one of them when Arkansas was inside Auburn's 30, and one when they were inside their own 30.

Arkansas tried to give the game away, but Auburn didn't want it, as they committed 3 turnovers of their own.

This week, the heat will be on Tommy Tuberville who, for the second straight week, has lost to a team they probably should have beaten.  They drop to 2-3 in the conference, and all hope of a conference championship has faded, and now it appears the offense must start over from scratch.

One wonders if they will get that chance.  This was supposed to be a glorified bye week, but now they get a real bye week, and thanks to this loss, it comes at an absolutely terrible time.  This time will wallow in its own filth for the next two weeks until they get a shot at West Virginia, a team that is having their own problems right now.  The winner of that game gets partial redemption on a very disappointing season.

Even though both teams lost, Auburn now overtakes Tennessee as the team with the greatest amount of negativity surrounding it.

OK, we've talked about what this means for LSU, but what does it mean for Florida?  Well, once again they control their destiny, same as us.  Also, like Gary Danielson said, they appear to have found an offensive identity.  Instead of pounding it with Tebow, it appears their running game will consist of giving the ball to two undersized scat backs who are difficult to catch and wrap up.

It appears to be the perfect thing for their system, as Jeffrey Demps and Chris Rainey have been the centerpieces for the biggest offensive explosions of Florida's season:  the last quarter of the Arkansas game, and the second half of the LSU game.

It appears I was wrong about this team having an air of negativity around it, and now they seem to have an air of positivity, if the sideline behavior in the closing moments of the game was any indication.  The team was happy, jovial, celebratory, as if they had just, umm.. beaten the national champions convincingly.