There were a few choices here this week.  Several Florida players made a bid.  Jeffrey Demps.  Percy Harvin.  Tim Tebow.  Unfortunately none of them really stood out from the others or put together superlative numbers.  Matt Stafford had a boatload of yards, but also a couple interceptions.  No.  This week our And The Valley Shook SEC Offensive Skill Position Player of the Week honor goes to someone I would never have expected to honor in this way this year: 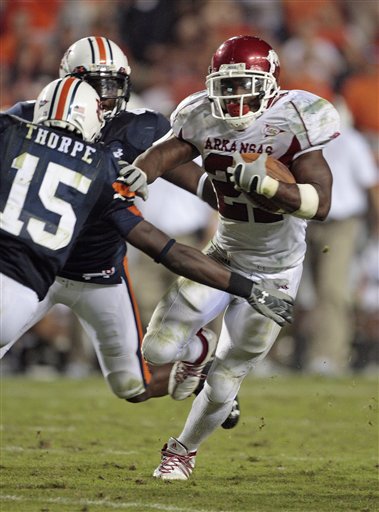 Thank you, Michael Smith, for allowing me to avoid giving the award to a Gator.

Pint-sized Arkansas running back Michael Smith ran all over the depleted Auburn defense.  Even though he's only 5'7" and is generously listed at 176#, he carried the ball 35 times for 176 yards, and got the game-winning touchdown on a 63 yard scamper in the 4th quarter, a run which nearly put the game away, though Auburn made it interesting with a late safety and a chance with the ball to put it in field goal range, only to come up short due to an interception.

He added 46 receiving yards on two catches also.  Oh, and he returns punts too.  Michael Smith had 232 total yards on the day.

In reality, Michael Smith has been doing this all year.  This was his 3rd 100-yard rushing game, and he has over 200 receiving yards on the season.  He's doing everything except passing, kicking, and playing defense.  He's really been the only big bright spot for an Arkansas team that has struggled this year until this week.

One wonders if he can keep this up.  He is barely bigger than Trindon Holliday, and he takes an awful lot of hits.  With an inconsistent passing game and an utter lack of defense, Bobby Petrino relies heavily on Michael Smith to move the ball.  He has responded, and he was the difference in this game.

Now let's be clear.  There was a 63-yard outlier in this game.  As always, we look at outlier individually and then average the rest.  He had a game-winning 63 yard touchdown run and other than that he had 34 rushes for 113 yards, for an average of 3.3 yards per rush.  Hardly outstanding, but consistently productive.  Considering they gave him the ball 35 times on the game, you have to figure there were a lot of no-gains in that as well as some bigger gains.  But he helped move the chains, and contributed to an enormous time of possession advantage.  Yes, I realize time of possession means little, but it wore down the overtaxed and shorthanded Auburn defense, which gave up 416 yards on the night, over half of them to Michael Smith.

I didn't expect to be giving this award to a Razorback at any point this year, but Smith is deserving.