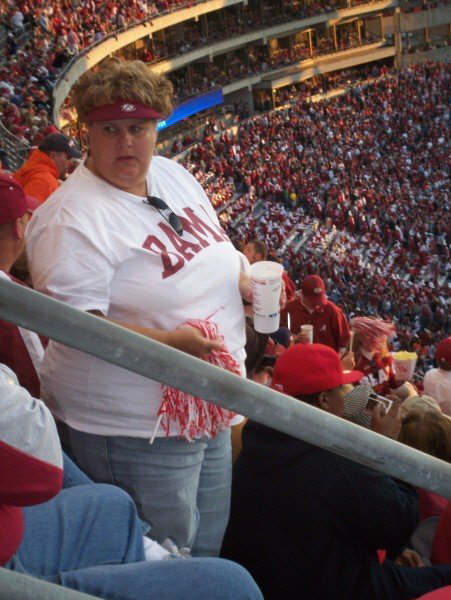 Strangely enough, when you google "bama ole miss" and click on "images", this is the first picture that comes up.

Some really nice games are on tap this weekend.  So nice, in fact, that a division showdown between two ranked teams is going to be the morning game this week.  Anyone care to research when that last happened?  Only one of the five games this week will not be on at least regional television, and that one game is a total dud that no self-respecting person would ever want to watch unless he happens to be a fan of one of the teams.

Anyway, to the previews!

Two one-loss ranked teams fighting like mad for a spot in the SEC Championship Game, and it's on at 11:30am on a regional telecast.  The SEC is a wonderful place, is it not?

OK, we know it's because Vandy has no fans, and so they don't bring any ratings to the national broadcasts.

Anyway, this is a game of upstart overachievers versus traditional power expected to challenge for the national championship.  Last week, the upstart overachievers had trouble maintaining their solid play and lost to a resurgent Mississippi State Bulldog team.  The Bulldogs they face this time around are even better, even if they haven't set the world on fire lately.

Really, though.  What has happened to the Bulldogs?  Pre-season #1 and one of the most heavily hyped teams in the country started the season blowing out the teams they needed to blow out.  Then they got a lackluster 14-7 win against a South Carolina team that had been struggling to do anything positive offensively.  Since then, they haven't looked all that great.  A solid win over an Arizona State team that was ready to implode and an impressive but not exactly scintillating win over a Tennessee team that had already imploded were sandwiched around an embarrassing loss to a Western Division opponent that really wasn't supposed to stay on the field with them.

This just isn't the dominating Georgia Bulldog team we expected this year.  At least not so far.  At least, not dominating like Florida dominated us.  Granted, they're winning the games, and in the end that's what counts.  But Georgia should be much better than Vandy, despite the similar records.  If Georgia lets Vandy stay in it, I think you'll hear a lot more grousing.  If Vandy wins, "grousing" may not be the right word.

Vandy's defense is solid, but its offense needs some bounces to go their way in order to accomplish much in the way of anything.  And after a year and a half, they're still undecided on what to do with their quarterbacks.  Chris Nickson remains an enigman who wins games on his own at times while losing games on his own at other times.  There is really no running back to speak of, and the poor passing makes one wonder what exactly the receiver corps is supposed to be doing.

If Georgia plays up to its ability, this should not be a close game, but Georgia hasn't played up to their ability much lately, and Vandy seems to have an uncanny ability to bring out the worst in decent teams.

This probably isn't a game you look at and shout "MUST-SEE TV!", but it is an intriguing matchup.  Ole Miss is a team, as we've seen, that can surround an epic win over one of the most talented teams in the country with dispiriting losses to undertalented teams.  Losing to Vandy at home, then beating Florida on the road, then losing to South Carolina on the road is one of the stranger stretches of football you will see.

This week, Ole Miss gets another opportunity to play up to its level of competition, and on the road as well, where they've had their greatest success.

This may not be Georgia vs. Florida or LSU vs. Auburn, but there are some very intriguing subplots here.  Alabama's offensive line has been one of the big surprises in the country this season.  Ole Miss's defensive line is very very good as well.  Strength vs. Strength.

Alabama's passing game has been very pedestrian, while the Ole Miss secondary appears to be somewhat vulnerable.  Weakness vs. Weakness.

Ole Miss can hardly run the ball at all from a traditional running formation, while Bama's defensive line has gobbled up running backs all season.  Strength vs. Weakness.

I think if I was Ole Miss, I would pass on 75% of the downs in which I was not in the Wild Rebel formation, and I would use the Wild Rebel sparingly unless it proved to be particularly effective early.  If I was Bama, I would play action pass a LOT.  Test the Ole Miss secondary, which has not struck me as being particularly good.

Bama's the clear favorite here, but there's nothing in the world that says Ole Miss can't win this.  They have to bring the game they brought to the Swamp, and perhaps they need to bring more.  It will be fun.