Share All sharing options for: South Carolina: A Preview 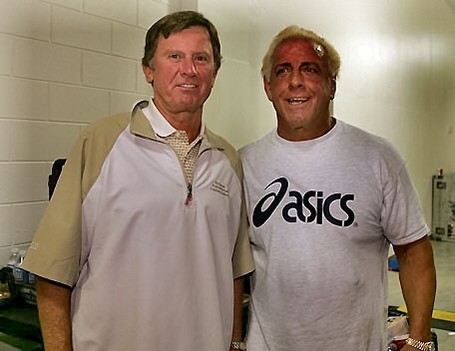 I'm still getting the hang of finding cool pictures.

South Carolina has employed the 2-quarterback system, but appears to be moving towards redshirt freshman Stephen Garcia as a full-time quarterback.  Garcia is young, inexperienced, and something of a loose cannon off the field, but he is a good athlete on the field.  As a backup quarterback who has only played in 3 games so far, he is actually 3rd on the team in both rushing attempts and 2nd in yards rushing.

He's an emerging quarterback, but it remains to be seen if he can carry this offense full time.  He has only attempted 35 passes on the season, which is less than 1/3 the number that Jarrett Lee has attempted.  He's had a high yards per attempt rate, but he hasn't had to play a full game yet.  Can he keep it up?

And how will LSU play against a green quarterback?  It's no secret that our pass defense has been... uninspiring, shall we say?  As has our pass rush?  Against a quarterback who's only thrown 35 college passes in his career, over half of which came against UAB, what will we do to try to make him uncomfortable?

Personally, I can't wait to see what we have in mind.  I just hope it's not "sit back in zone coverage and rush four oversized, underquick linemen."

We know South Carolina can't run the ball.  Mike Davis is a solid running back, but the line just hasn't opened up the holes for him.  And the problem seems to be getting worse.  He got 101 yards in the season opener, and hasn't gotten more than 80 since, and only once has he averaged more than 5.0 yards per carry since the first game, and that was against Wofford.  Against Georgia and Kentucky, he averaged under 2.0 yards per carry.

And he's their leading rusher.  Yeah, they can't run the ball effectively from the tailback position.

Clearly, we are struggling on pass defense, where we rank in the bottom 3rd of the conference in both yards-per-game, interceptions, sacks, and pass efficiency defense.  This plays right into South Carolina's offensive strength, which is passing the football.  South Carolina is in the top third of the conference in yards per game, and in the top half in pass efficiency.  They do give up a lot of sacks and interceptions, however, and if those deficiencies our game are going to turn around, they should do so here.

I genuinely think we are better than South Carolina, but perhaps not by all that much at this point.  I think our defensive line should push their offensive line around on running plays.  I think they might get some big plays in the passing game, but there's no excuse for not teeing off on the blitz and trying to make the redshirt freshman as uncomfortable as possible.

South Carolina cannot protect the QB, and while we aren't rushing the QB all that well, we should be able to scheme to correct that.  The biggest mistake I think we could make in this game is to sit back and let Garcia get comfortable.  We should make it so that he never knows what's coming.  If we do that, we could take him out his game and build a lot of positive momentum on defense.

Offensively, we will have to slug it out with a very good defense, but we should get some points here.  The key will be to control the line and make South Carolina stack the box to stop the run.