LSU vs. Nobody: A Preview

Share All sharing options for: LSU vs. Nobody: A Preview

With a bye week this week, LSU can spend its time resting its injured and preparing for a primetime showdown against Florida.

Of course, LSU has some worrisome injuries, but we are hopeful that we will have our full starting lineup available when this game finally comes around.  Starting middle linebacker Darry Beckwith was seriously missed against Mississippi State, and he is probably the least likely to return or to be less than 100%, as he is recovering from arthroscopic surgery.

Still, by all indications the coaches are hopeful that he will be back for this game. 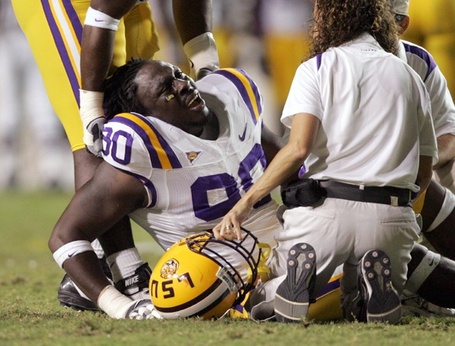 No, I'm not particularly happy that he was told he could go in if he wanted, and chose not to, but I wouldn't say that to his face, because he is much much bigger than I am.

Other injuries include minor injuries to both starting defensive tackles, Ricky Jean-Francois and Charles Alexander.  Both got hurt against MSU and both left the game.  Alexander reportedly returned for a few plays.  Jean-Francois could have returned by chose not to.

Reports are that neither was at practice today, but both are expected to be available on October 11.

Also dinged up during the Mississippi State game were offensive guard Lyle Hitt, who was replaced by Josh Dworaczyk, and linebacker Kelvin Sheppard.  No word on Sheppard's prognosis yet, but Hitt reportedly practiced today.

Last but certainly not least, Andrew Hatch is practicing full time now, and while he was the "emergency" quarterback against Mississippi State, he figures (by my reckoning at least) to be a full go at second string against Florida.  He'll probably see some action at some point in that game.

While we have some injury situations working against us, it is nothing like what is plaguing the Gators right now.  Linebacker Dustin Doe is out for this game after having hernia surgery.  Emmanuel Moody was just starting to emerge as a productive running back, and now he's suffered a high ankle sprain.  The offensive line has injury problems all over it, and may need to pull the redshirt off of some freshmen or do a mid-season conversion from the defensive line just to make it through the season.

Their injury situation is perilous, and they have another game in which to continue getting banged up.  You never hope for injuries, but you also don't mind benefitting a little from them.