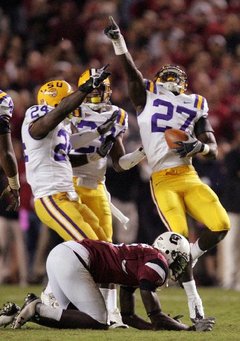 OK, maybe "clinching" is too strong of a word, but the interception combined with a couple of first downs on the subsequent possession combined to clinch the win.

I'll be honest and say that at halftime I was pretty far down on the team.  The Gamecocks were moving the ball well.  Our offense had missed some opportunities, and then made some costly mistakes towards the end of the half.  The big interception was one mistake, but there was also the Lee fumble and the Lafell drop.

I was feeling pretty low.  I thought we did not look spirited.  We looked slow and sluggish, like we were still experiencing a hangover from last week's loss.  South Carolina discovered a new hole in our coverage by dragging a tight end short across the middle of the field, and we did not seem to have an answer for it.

On watching it again, though, it was not that bad.  We really only had a bad 6 or 7 minutes, not a bad half.  Except for that last stretch that ended the first half, we had been the better team.  We had run the ball effectively and had some semblance of a passing game, though with some bad drops.

In the second half, though, the team really came alive.  We made halftime adjustments to cover the tight end (we treated him like a wide receiver and covered him with a corner or a nickel) and to get more pressure, and we adjusted our offense to better utilize the 2-quarterback system.

Saturday night was the first time I've seen LSU use a true 2-quarterback system in which it actually seemed to take advantage of the strengths of both without magnifying the weaknesses of either.  We didn't sell out the run when Hatch was in the game, and we didn't tip off a pass when Lee was in the game.  We didn't get delay penalties or use timeouts to avoid a penalty.  It worked really well.

If we hadn't been playing one of the toughest defenses in the conference, we would have scored 4 touchdowns in the second half and it would have been a blowout.  give credit where it's due.  The South Carolina defense is an excellent unit.  They have been all season.  Here is a list of the number of points South Carolina has given up in each game this year:  0, 24, 14, 13, 13, 24, 17, 24.  That's 1 shutout, 4 other teams held to 17 or below, and no one getting more than 24 points.

No team has been able to look like an offensive powerhouse against them, because they have excellent players at all three levels of the defense and they've remained pretty healthy all year.  If they had an offense, they'd be one of the best teams in the conference.  We scored as many points against them as anyone has, and we had as great of a margin of victory over them as anyone has as well.  They've lost some tough games, but they've made all of the games tough, including this one.

Like I said before, this won't go down as an epic win, but this is a solid win for this team, especially coming off such an embarrassing loss.  And if we avoid that one big mistake we keep making, this game could have had a much bigger margin of victory.

Anyway, I didn't want to just reprise thoughts from last night, I want to get in some observations I made on second viewing:

That's all I've got on this game right now.  I'm looking forward to the next one.