Share All sharing options for: Week 8: Around the SEC, Part 2 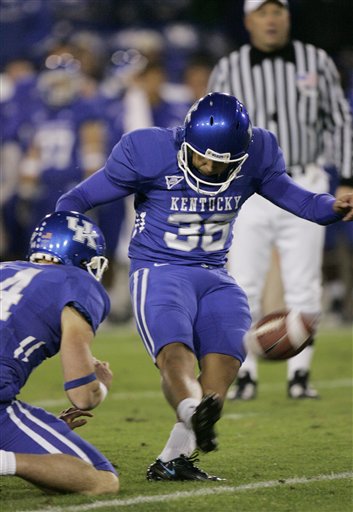 While nothing particularly shocking happened, the season has progressed beyond the half-way point, and some early underdogs are proving to be pretty resilient.

Has anyone noticed that Kentucky has 5 wins?  And that they can get to 8 wins without pulling an upset over anyone?  A furious rally in the last part of the 4th quarter kept Kentucky in the hunt in the SEC East, for now.

Once again, statistically the story was Arkansas running back Michael Smith, who almost hit the 200 yard mark, getting 192 yards on 35 carries, adding 33 yards receiving as well.  He scored both of Arkansas's touchdowns.

It's too late for Arkansas, who would have to mount a furious rally to get to bowl-eligibility at this point.  Winnable games remain against MIssissippi State and Ole Miss, but those will be fights.  Other games include South Carolina, LSU, and Tulsa, all of whom will be favorites against Arkansas.

The Razorbacks have put together an exciting offense, but their inability to protect the ball and inability to play solid defense have been their undoing this year.  They committed 4 turnovers in this game, and were awful through the air, averaging only 3.1 yards per attempt while throwing 2 interceptions.

Blowout on the scoreboard, not so much on the box score.  Tennessee outgained Mississippi State modestly, 275-189, which I suppose isn't THAT modestly.  They outgained MSU by about 50%.  The big problem here was turnovers.  MSU committed 3 while Tennessee committed none.  The other big problem was that Tyson Lee did his best Wesley Carroll impersonation, averaging a mere 5 yards per attempt while throwing 3 picks, two returned for touchdowns.  Things got so bad, they brought Wesley Carroll back, though he was even worse.

Really, the Bulldog offense was awful, averaging a mere 3 yards per play while committing 3 turnovers.  Take out the turnovers, and this is a much closer game.  Tennessee still wins it, but it's much closer.

For the season, Tennessee barely has a pulse.  They sit at 3-4, heading into a showdown with Alabama next weekend.  They've shown improvement lately, but this is a big step up in competition from Mississippi State.  They'll have to play their best game of the season to have a real fighting chance.

What is there left to say about this game?  How about a shout-out to Terrance Toliver, who again had a nice grab, and appears to be making that push to be the 3rd wide receiver.  He's got all the talent in the world.  He just has to harness it and put it out on the field

One worrisome thing going forward is our injury situation.  T-Bob Hebert is now out for the season, meaning our OL depth took a serious hit, as did our special teams.  T-Bob excelled as an up-field blocker on kickoff returns, and there has been talk that he could have a future at fullback rather than center.

Add to that Beckwith's lingering injury, Ricky Jean-Francois's problems coming back from a groin injury that supposedly was healed up by the second half of the Mississippi State game, Charles Alexander's inability to play a full game, Demetrius Byrd's continual dings (it seems like every time he's tackled, he stretches something awkwardly and limps away), and Jordan Jefferson's bum shoulder (snicker!) and this is a bunch that is having some trouble staying on the field.  During this game, it seemed like players were going down on every play.

Of course, this week we get Georgia, who has had the worst injury luck of any team in the conference.

As for the win, if there was any doubt about us going bowling, I think this pretty much ended it.  Seven wins are virtually assured.  Now we're just arguing over which bowl we're going to.  When it comes down to it, that's pretty nice, because we could not have said that ten years ago.