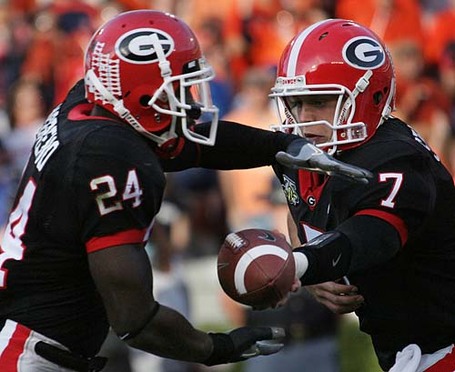 Nice picture of Stafford and Moreno in one shot, but you won't be seeing those fine lookin' unis again any time soon.

But anyway, Georgia's good.  How good?  Well, let's take a look at some numbers:

Anything stand out there?  Well, the passing numbers are outstanding.  Matthew Stafford has a live arm, and he's getting better at learning how to use it.  He has a 2:1 touchdown to interception ratio, which is much better than last year or the year before.  His completion percentage has gone up each year, and sits at 61% now.  He's averaging 8.36 yards per attempt.  He's still taking a few sacks, but he's also busting out some good runs, and has had positive rushing totals in all but two games this year.

Given that LSU has been a poor pass defense team this year (9th in the SEC), there is actually a little cause for optimism there.  First, UGA does not run the sort of complicated passing offense that has had us flummoxed at times.  They have two very good wide receivers who have caught most of their deep passes, and they use the running back out of the backfield a fair bit.  Their third receiver is Michael Moore, and he is clearly #3.  They don't make much use of the tight end, and they don't run a lot of 4- and 5-wide receiver sets.

They pretty much just line up and go at you.  They're a lot like LSU in a lot of ways, then.  We also don't really use our 3rd wide receiver all that much.  We throw to the tight end a lot, but Georgia throws to the fullback more.  We both throw to running backs at times, and will sprinkle a few extra passes to Terrance Toliver or Chris Mitchell here and there.  But mostly our downfield passing game revolves around Demetrius Byrd and Brandon Lafell.  Georgia's revolves around AJ Green and Muhammed Massaquoi. 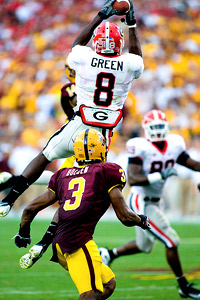 Lately, the passing game has mostly revolved around the freshman Green, who has averaged 7.0 catches and 108 yards per game in the last 4 games.  That's outstanding.  Over the same period, the senior Massaquoi has averaged 3.75 catches and 49.8 yards per game.  Those aren't bad, but Green's emerging as a dominant player very early in his career.  These two are the bulk of the offense out at the edge for Georgia.

I think that means it will be harder for Georgia to get those bad matchups that everyone else has gotten on us by being able to line up quality receivers all over the field, which brings us to the second point: we seem to have finally improved on the pass defense.  Last week, in the second half against the Gamecocks, the coaches finally seemed to feel comfortable with Chad Jones at the nickel and with Patrick Peterson taking a lot of snaps in the secondary.  I think, finally, we are sporting a lineup that actually has our most talented players on the field, whereas before the coaches weren't comfortable that Peterson or Jones had learned the system sufficiently enough to be comfortable.

This could, only could, mean our 9th ranked pass defense is a thing of the past.

Thirdly, we also discovered a pass rush last week.  Before last week, we were one of the worst pass rushing teams in the conference.  Now, we're #3 in the conference in sacks per game, all on the strength of one 6-sack performance.  Yes, it was against South Carolina, and their offensive line is horrid.  But Georgia's isn't really all that great either.  They have a ton of injuries and just don't have their best lineup on the field.  Granted, they've only given up 8 sacks all year, but that's mostly because Matthew Stafford has a quick release and gets rid of the ball.  But if he can't be sacked, he can be hurried.  And that's what we'll have to do.

When LSU has the ball, I think we'll find our greatest success running right at Georgia.  Their defensive line is banged up, and their linebackers are extremely fast.  We should neutralize the linebacker speed by running right at them and making them stand their ground.  Run up the middle, and then use the play-action pass.  It should wear them down.

Let's be honest here.  We have not beaten a team as good as Georgia.  The only we've played that was as good as they are pounded us into dust.  That was then, and this is now, and we have this game at home, which should give us an advantage.  However, I do believe we are going to have to play sharper than we've played all season if we're going to win this one.

I'm not saying we have to approach new levels of good play.  We don't.  We only have to play at our highest level for the entire game, instead of for only a half or only a quarter, as we have done at times this year.  In fact, I don't think we've played a truly complete game yet, unless you count the Appalachian State game, which was an eternity ago.  We just need to play the way we played in the second half of the Auburn game (on offense) or the second half of the USC game (on defense) the entire game, and we can win this one.

If we have stretch like the 1st half of the Auburn game or the last 6 minutes of the first half of the South Carolina game, or if we give up long touchdown drives like we did against Mississippi State, we basically have no chance.