Week 8, And The Valley Shook SEC Offensive Skill Position Player of the Week

Share All sharing options for: Week 8, And The Valley Shook SEC Offensive Skill Position Player of the Week

I have to rethink my guidelines about not giving this award to a player on a losing team.  It's not a rule exactly.  It's just something I don't want to do and haven't ever done yet.  Once again, though, it may be something I need to give more serious consideration to, or at least re-examine the rationale for the rule.  Arkansas's Michael Smith had another gigantic Saturday with 225 yards of total offense, including 192 on the ground, and he scored both of Arkansas's touchdowns.

But his team only scored 20 points, and they lost, due to some 4th quarter breakdowns on defense.  Instead of MIchael Smith, this week you get a return engagement of: 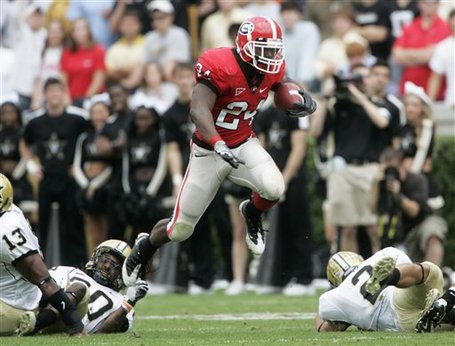 Yeah, I know I've used this picture already, but it's a good picture, and the only one I could find of Moreno from this week.

Georgia's Knowshon Rockwell Moreno ran for 172 yards on 23 carries for a whopping 7.5 yard per carry average.  He also scored one touchdown.  In a game in which Vandy stayed competitive until near the end of regulation, Moreno made a huge difference.

What's more, Moreno did it without outliers.  There were no 50 yard runs.  The longest play from scrimmage that Moreno had was a 22 yard run.  Not that there's anything wrong with an outlier.  Run the ball 60 yards all you want, but having one or two of those skews averages and makes the stats not really reflect how the game went for you.

Moreno was Georgia's best offensive player on a night when the passing game was not its usual dominant self.  It wasn't bad, mind, but Stafford 194 yards with 2 touchdowns and 2 interceptions was not what he's been doing this year.  Vandy's solid secondary was able to hold him in check, but had no answer for Moreno.

Knowshon Moreno then is this week's ATVSSECOSPPOW.