Week 9: And The Valley Shook SEC Offensive Skill Position Player of the Week

Share All sharing options for: Week 9: And The Valley Shook SEC Offensive Skill Position Player of the Week

This week, there was not a lot of good choices.  Auburn got pummeled by West Virginia.  Vandy got beaten by Duke.  Mississippi State played a cupcake.  Florida managed a blowout win so thorough that the starters were out of the game before they had time to pad their stats.

So really only 3 games provided any candidates at all for the ATVSSECOSPPOW.  Mike Wallace for Ole Miss, with his 5 catches for 120 yards and a touchdown, 2 runs for 17 yards, and his solid kickoff returning would have been a nice choice.  Plays made by him set up a touchdown and a couple field goals in a close game.  I didn't go with him, because there were also a lot of incomplete balls thrown his way, and some of his returns and catches did not lead to any points.  Julio Jones' 6 receptions for 103 yards was also a nice night.  What's more, 5 of his 6 receptions came on drives where Bama scored points, and if you believe the ESPN play-by-play summary, not one ball thrown his way failed to be completed.

But, we're going another way. 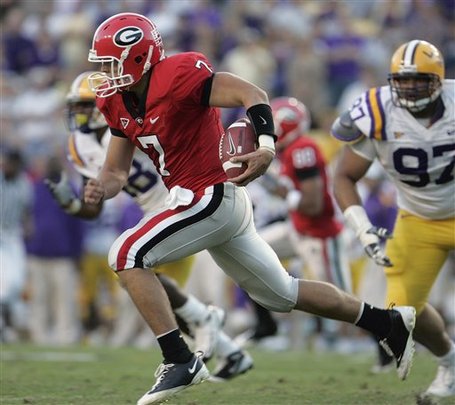 There are two Class of 2006 5-star recruits in that picture.  One of them is scoring a touchdown.  The other isn't.

Georgia QB Matthew Stafford had a great night at the expense of my Tigers.  He completed 65% of his passes.  He averaged 9.6 yards per attempt.  He made a couple of outstanding throws.  He took care of the ball.  When his team needed him, they put the ball in his hands and he made the play.

Actually, Stafford was outgained through the air by Jarrett Lee, 287-249.  Lee also had more yards per attempt (10.3).  This is why I disagree with the naysayers who think Lee does not have a future.  He is productive as all heck.

But those interceptions.  Lee has to grow out of those, and he eventually will.  In the meantime, we have to let the defense and the running game carry the load.  The running game is doing its part.  The defense is not.

But anyway, this is about Matthew Stafford.  He was great on Saturday.  Not only was he accurate, but he also got the ball out of the pocket to stay out of trouble.  He was only sacked once, and one of his biggest throws of the night came when he had to hurry to avoid a sack.

He also ran for a touchdown.

Yes, I know I pick Georgia players for this award a lot.  The thing is, Georgia is a very good offensive team that puts up a lot of yards and a lot of points.  What's more, they do it basically with a big 3: Stafford, Moreno, and Green.  Where Florida uses a myriad of weapons, and where Bama does not throw frequently and uses a running back platoon, and where LSU uses a QB platoon and a RBBC, Georgia pretty much runs with Moreno, and throws with Stafford, most often to just a couple of wide receivers.  Their players (like Tebow last year) put up a lot of yards individually and they dominate this particular award.

So this year, the ATVSSECOSPPOW is a Georgia award.  Maybe next year it won't be.