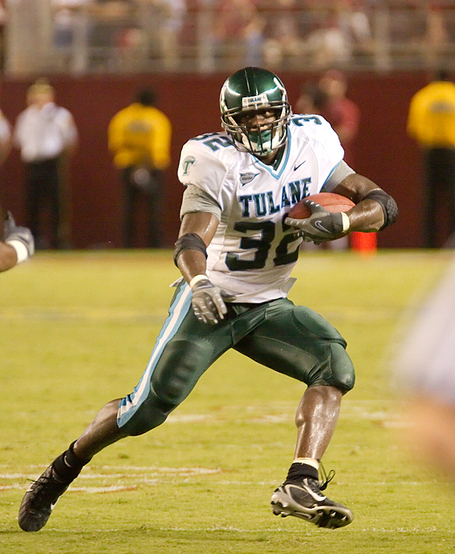 This guy is a really good running back.  He will not be playing against us.

I think most of us remember that Tulane put a good little scare into Bama earlier in the year.  Right after Hurricane Gustav, the Tulane team spent most of the week in Birmingham preparing for their season opener against a Bama team that was coming off a big win over Clemson.  Bama scored two quick special teams touchdowns, and from that point on Tulane kept up with Bama.

They did more than keep up.  They outgained Bama on the night by 318-172 in yards.  Bama could not pass on Tulane at all, accumulating only 72 passing yards at 3.2 yards per attempt, while Tulane put up 232 yards passing on the night.    They couldn't find the end zone, but they moved the ball around through the air decently well while playing from behind most of the night.

This is not that same Tulane team.

Second, all the mojo this team may have had at that time has evaporated.  Instead of riding high emotionally off the hurricane, they are in the dumps after losing their last three to Army, Utep, and Rice.  Rice blew them out.  Their two wins on the year are against Louisiana-Monroe and Southern Methodist.  Things are so bad, they couldn't sell 7,000 tickets to Tiger Stadium.  They had to return over half of them.  That has to be demoralizing, even beyond mere losing.

And if you think Jarrett Lee has had a problem with interceptions, Tulane's quarterback has a worse TD/Int ratio, has a worse yards/attempt stat by over a full yard, and he'll be without his favorite receiving target.

Defensively, the team that held Bama to 72 yards passing allowed Rice to complete 75% of its passes.  Granted, Rice uses a short, high-percentage passing game, but still.  Also, they are giving up a lot of rushing yards.  Rice averaged almost 7 yards per rush against Tulane.  Their previous opponent averaged 4.6 yards per rush, and the one before that (Army) averaged 6.6 yards per rush.

So while Tulane may be able to put up a fight against us when we pass, we should rush the ball very effectively, and their offense should struggle against our defense.

Guys, I'm not convinced this is a "name your score" kind of game, unless Tulane just doesn't show up ready to play.  But we should win handily.  It wouldn't surprise me if it's still relatively close at halftime (say, a 14-point lead), but Tulane should not be still threatening to win at any point in the second half.