Share All sharing options for: Around the SEC, Week 6, Part 1 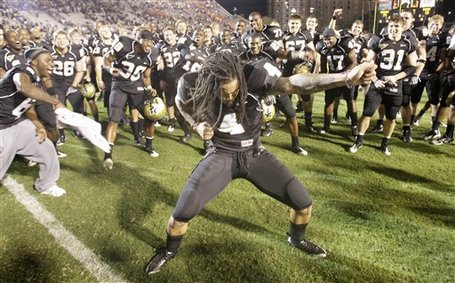 Who could hate this?

Despite the lack of LSU playing, the week turned out to be pretty fun, thanks to a plucky little team of nerds from Nashville.  Other than that, it wasn't really all that exciting, but the Commodores are riding high at the moment.

But there was, of course, other action.  We won't even get to that game until tomorrow.

Don't be fooled by the score.  Florida didn't look all that impressive to me, and this game only became a blowout late in the game when, apparently, Arkansas totally stopped playing.  Florida poured on 21 points in the 4th quarter, including 2 long touchdown runs in the last 5 minutes.

This is not to say they "ran up the score."  They didn't.  They just scored some late points that make the score appear to be more lopsided than the game really was.

This is not to say that Arkansas threatened Florida.  They didn't.  At no time when this game was going on did I think to myself, "Arkansas really has a chance here."  I was instead struck by how well Arkansas could move the ball against Florida, and how spectacularly their drives collapsed once they got close to scoring territory.

Of Arkansas's five first half possessions, all but one of them ended with the ball on the Florida 41-yard-line or further.  Yet they came away with no points on those 4 somewhat impressive-looking drives.   In the second half, they started out moving the ball again, and even scored a touchdown.

All in all, Arkansas had 7 drives that threatened to score points.  They only had the ball 10 times in the entire game.  For every drive that Arkansas got the ball past the Florida 42-yard-line, they averaged one point per drive.

Florida took advantage with some big plays, and scored touchdowns the last 3 times they had the ball, converting an unimpressive 17-7 fourth-quarter lead into a style-points-hogging blowout.  Still, they didn't look like they could consistently get a push on either their offensive or defensive lines.  While Florida got 278 yards rushing, one has to realize that 159 of those yards came on 3 plays.  This is not to say that you can just discount outliers, but you can set them aside and talk about them differently.

So, Florida had big runs of 36, 75, and 48 yards, all for touchdowns.  On other rushing plays, they netted 119 yards on 35 attempts, for an average of 3.4 yards per ordinary carry.  Of course, you can also subtract the sacks and lost yardage as well, but I don't have those statistics.

Ole Miss is dangerous, but they're not good enough to beat average teams if they don't show up with at least their B-game.  Show up with your C game, and a team like South Carolina can beat you, especially if they get a career night from their much maligned quarterback Chris Smelley.

Smelley completed 22 of 32 for 327 yards, 3 touchdowns, and 1 interception.  He spread the ball around to 9 different receivers, but his favorite target was freshman Jason Barnes, who caught 7 of his passes, including 2 of his touchdown passes.

I did not watch this one, because it was not on television, and I did not want to try to watch it on the computer.  However, i can't help but notice that once again South Carolina struggled running the ball, as their leading ground gainer averaged less than 4 yards per carry.

Ole Miss similarly struggled, as their running backs averaged on 3.3 yards per carry.  The Wild Rebel formation with Dexter McCluster running the ball had a little more success, but it appears that South Carolina had it figured out, and did not allow McCluster to beat them.

South Carolina may have righted their ship, as they now sit at 4-2.  Still, they will need to figure out how to win 2 or 3 more games to get to a bowl.  The Arkansas game on November 8 is a good candidate, and Kentucky and Tennessee are certainly vulnerable, but other than that they'll have to pull a real upset over a Florida, Clemson, or LSU.