Share All sharing options for: Around the SEC, Week 6, Part 2 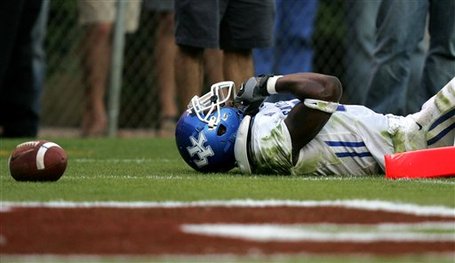 Maybe the play of the game, as the Kentucky defender laments his inability to fall on a fumble that was just sitting there waiting for him.  Instead, he pushed it out of bounds and Alabama retained possession, and put the winning points on the board a few plays later.

I'm having a tough time gathering my thoughts on this one.  One the one hand, after Glen Coffee's electrifying long touchdown run in the first quarter, I never believed Kentucky was actually threatening to win this game.  On the other hand, offensive inconsistency, missed field goals, and secondary breakdowns by Bama allowed Kentucky to stay in this one long enough to make it interesting at the end.

You can't say enough about Bama RB Glen Coffee's day.  It started with a terrific breakout run for the end zone from 78 yards out, but even discounting that outlier, he ran 24 times for 140 yards, for an average of 5.8 yards per carry.  That's an outstanding day for a running back.

Once again, Bama put the game in the hands of its running backs and its defense, as John Parker Wilson only attempted 17 passes, completing 7.  It was a solid strategy, as even the backup running back, Mark Ingram, averaged 6.0 yards per carry.

Yeah, Kentucky handed Bama its second touchdown, and outside of the one big run Bama struggled to finish drives.  I think this means that Bama is just one of those teams that, when they aren't at their best, is going to struggle.  When they're intense and emotionally invested, they are an excellent team.  When it's just another game, they will play down to the level of competition.

I think to a certain extent, every team is like that.  Every team can play much better when it's fired up, but you can't be fired up for every game.  It's just not possible for a team to put out that much energy 12 times in 14 weeks.  At best, you can probably do it about 4 times in a season.  The other 8 games, you had better have good talent and hope the other team isn't having one of its best games.

For what it's worth, I think this is exactly what happened to LSU against Kentucky last year.  We had just had a big emotional win over Florida, and we couldn't keep up that intensity the next week, while Kentucky was fired up to play us.  We were a better team than Kentucky, but they were pretty solid in their own right.  I think in this case, Bama was fortunate that Kentucky did not have the kind of offensive weapons last year's Kentucky team had, or they would have been in real trouble.

OK, I know the story here is the lackluster Auburn offense, and also the curious decision by Auburn's playcaller to stop using the power running game that had been so effective early.  I know that's the story, but what the heck happened to Auburn's special teams?  Wasn't Wes Byrum a great kicker last year?  How did he miss an extra point?

Still, I don't think you can fault Auburn for not running.  After all, they ran.  A lot.  They ran twice as much as they threw, if you count QB scrambles.  The problem was that after the first two drives which netted 13 points, the running game stopped being effective.

Add in that the Auburn defense lost its best player to injury, and you had a recipe for a disaster.

Losing to Vandy is a disaster, even though Vandy is actually a pretty good team.  They've gotten to 5-0 on the season without playing a single cupcake (for Vandy).  They've beaten 3 pretty solid SEC teams, and they sit on top of the SEC East all alone.

None of that matters.  You lost to Vandy.  Sugar coat it all you want, but Vandy doesn't have athletes half as good as Auburn's, or LSU's, or South Carolina's for htat matter.

Vandy now has a legit shot at 7 wins.  Eight is not out of the question.  They'll be favored in upcoming contests against Mississippi State, Kentucky, and Duke, and it would hardly be a big surprise if they beat Tennessee at this point.  Only Florida, Georgia, and Wake Forest appear to be beyond the edge of their grasp at this point.  This means that if Vandy wins all the games they should win, and all the games that wouldn't exactly be a big upset, they'll finish the SEC season at 6-2.  That could well be good enough to win the SEC East.

I had this game on upset watch, and NIU was ever-so-close.  Each of NIU's 3 scoring drives ended with field goals from inside the Tennessee 10 yard line.  In addition, NIU missed a long field goal.  If things had gone a little differently, the Huskies would have beaten the Volunteers, and Phillip Fulmer may not have been allowed to be on the team plane home.

As it is, no one, with the possible exception of Tennessee quarterback Nick Stephens, getting his first start, is going to be putting this game on his resume.  Stephens had a nice night, completing 10 of 17 for 156 yards and a touchdowns, but otherwise Tennessee was pretty lackluster, piling up only 225 yards of total offense.