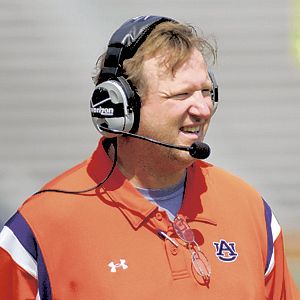 Much has been made by many people, including myself, about the struggles of the Auburn offense and about how the Tony Franklin system is not working there, for whatever reason.

However, there is now a very insightful article written by the guy who runs SmartFootball, and while that may be a somewhat egotistical name for a blog, in reading him in the past he proves to have a knowledge of football well beyond what I claim for myself.  His thesis is, "Auburn is not running the Tony Franklin system."

Franklin later surfaced at Troy University, where his offense succeeded, and he was hired by Auburn, presumably to run what he'd been coaching and selling for over a decade.

Despite outward appearances, that assumption is wrong. Every coach I speak to says the same thing: I don't know what they are doing at Auburn, but it ain't the Airraid.

For background, the Airraid offense is a variation of the spread that was invented/popularized by Hal Mumme, Mike Leach, and Tony Franklin at Kentucky in the '90s.  In the Airraid, Tim Couch would, at times, pass over 50 times in a game, mostly short passes and a lot of screens.

He goes on to give his theories as to why Auburn may not be running the Tony Franklin system: dissension among the coaches.  It makes sense.  Tony Franklin was brought in under circumstances of internal politics that are somewhat opaque to the average fan.  He was not allowed to bring in any assistant coaches.  The offensive coaches there had been running a power football system for a decade.  For whatever reason, he guesses, they hired Tony Franklin and then decided not to use his system.

He also debunks the notion that Auburn does not have the players to run the Airraid offense.

Back in 1999, [Oklahoma Coach Bob] Stoops hired [Airraid guru Mike] Leach and gave him free rein to install his offense. (In fact, I have a coaching clinic talk where Stoops said that he ordered Leach not to change anything that first year, because he wanted exactly what he saw with Kentucky.) And who was Leach's QB at OU? A noodle-armed guy named Josh Heupel. And their receivers were a bunch of converted running backs and defensive backs. Yet I didn't hear the same cry that "Oh, we'll spread it out when we get the athletes." (News flash: if that's your approach, it'll never happen.) Now, I also observe that Stoops too wasn't entirely comfortable being a spread it all the time guy, and Leach happily went on to Texas Tech where he could be as much of a mad scientist as he liked. Yet OU stuck with the exact same system the next year with Mark Mangino as OC, and won a National Title. But Stoops knew what he was getting when he hired Leach, and most importantly he let him do it.

This also dispels the notion that a system like the Airraid can't have success in a power conference.  Oklahoma went from mediocre to a national power by getting a jump start from this system.  Kentucky had its most successful run in my lifetime in the Airraid.  The system has worked at all types of schools, and it is even filtering up into the pro ranks.

Heck, reading this article, one thinks almost any reasonably accurate and intelligent quarterback can have success in the Tony Franklin system with a bunch of scrubs at wide receiver.  Much of the article is very inside-baseball.  Football, rather.  It explains some of the basic concepts of the Airraid and how that is different from just throwing a bunch of receivers on the field and telling them to go long.

That's not to say it's going to be here forever.  Heck, the same guy who wrote this article wrote another article over two years predicting that the spread had peaked in effectiveness.

The offense has arguably become the opposite of an equalizer, it has become an amplifier: if you are talented you can really rack up the points because no one can cover Vince Young, Ted Ginn or the like one-on-one, but if you're not, you just get sacked and no one gets open.

Yes, I know this is just a recycled article from another blog, but it's an important one, and an informative one.  I suggest reading the whole thing, both about Auburn and about the apex of the spread.