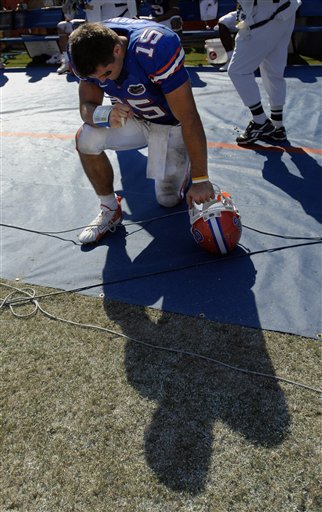 Some say his tears taste like rice krispie treats.

It's almost cliche to say that any analysis of the Florida Gators begins with Tim Tebow.  It's cliche because it's true.  As much as last year, the team revolves around Tim Tebow.  As much as I dislike Urban Meyer and think he's one of the slimier college football coaches around, I actually quite admire Tim Tebow as a player and a team leader.

He's an imminently likable kid who is also an intense leader.  I really enjoyed watching his reaction to the LSU fans distributing his cell phone number last year, and calling over and over and over and over again.  He took it in stride, and when he scored the first touchdown of the game, he gave it right back to the student section by pantomiming a phone call to them.  It was funny in a perfectly intentional and good-natured way.  I laughed with him, even though we were losing.

Like any good fan, I laughed at him when we won.  As much as I like Tebow as a player, his post-loss antics remind me a lot of 12-year-olds I saw when I used to work in Dixie Youth baseball.  I know the emotional aspect of college football is what makes it great, but he's way too old to continue losing his composure whenever his team loses a tough game.

Anyway, that's a lot of stuff without really getting to the point, which is to preview Florida.

In a year where line play seems more important than ever, Florida's lines are average at best, at least when you consider their injury situation, which has devastated the offensive line of the Gators in particular.  The decline in offensive line play, in my opinion, is the primary reason that Tim Tebow has not been as effective this year.

Last year, his cumulative passer rating was 172.5, and through the same number of games he had 11 touchdown passes with a 10.9 yards per attempt average, a 4.9 yards per carry average with 8 rushing touchdowns on 89 attempts (1 in 11.1 rushes).  Some of the difference in the cumulative stats are certainly an effect of the reduced number of plays due to the new clock rules, but it's hard to argue with the dramatic change in the rate stats.  He's down 2.9 yards per pass attempt, 2.3 yards per rush attempt, and isn't getting into the end zone nearly as often.

Les Miles says he's a better player than last year, and that may be true, but he's not producing like he did last year.  That's probably because of the players around him.

It's also not all about them putting the ball in the hands of the running backs.  Last year, Tebow finished with 210 recorded rushes, while the team as a whole had 487, meaning Tebow accounted for 43% of Florida's recorded rushing plays.  This year, he has 61 of Florida's 177 rushes, for ratio of 34%, a significant difference, but not that significant.  It means roughly that he's down 15 rushes over the course of 5 games, when you account for the different total number of offensive plays.

Part of the problem for Tebow is the line, and part of it is that defenses have figured out a few things about him.  First, while teams initially treated him like a scrambler and avoided blitzing Tebow, we have figured out that you can blitz him and have success.  Tebow is a strong runner, but he's not an elusive scrambler like a Vince Young.  With a guy like Young, you want to contain him and maintain lane integrity, which means little blitzing.  With Tebow, you can (and should) put as much pressure on him as possible when he's throwing.  For all of his success running the ball, he is really not any more mobile in the pocket than a guy like Matt Flynn is.  So teams have figured out to pressure him.

With Florida not at their best on the offensive line, and with their other key playmaker Percy Harvin at less than 100%, Florida's offense is ailing.  They still have a lot of team speed, but if this game holds to form for the SEC so far this season, team speed is perhaps not going to be that important.  Plus, LSU has their own team speed.

Defensively, Florida has the 3rd best scoring defense in the conference, giving up an average of only 11.4 points per game.  And while they've benefited from playing one or two offensively challenged teams, like Tennessee and Hawaii, it's hard to discount this statistic completely.

What explains the disparity between yardage given up and points given up?  I think you can point right to the Arkansas game.  Arkansas racked up 361 yards and moved the ball fairly easily against the Florida defense, but Florida stiffened and/or got turnovers whenever Arkansas actually threatened to score points.  If Florida gives up 2 more touchdowns and a field goal to Arkansas (recalling that Arkansas ended 7 drives in or near scoring territory and only scored once), they're down from 3rd in scoring defense to 5th, which is a lot more representative of how good their defense is, in my opinion.

Their defense is athletic, but I think is weak on the line, and LSU with its power running game and play action game can probably have success there.  We can also take advantage of injuries on the defense, including to starting linebacker Dustin Doe, who is out with hernia surgery.

Junior middle linebacker Darry Beckwith said he expected to be back at practice Monday after missing the last three-plus weeks after he tweaked a knee against North Texas.

“They’re going to let me go full throttle and see how I do,” Beckwith said.

OK, so that's not a ringing endorsement of either player's health, but it's a start, and it's better than Florida's situation, even though it does not address the Charles Alexander situation.

Plus, I get a bad vibe from this Florida team.  I don't think they're entirely right at this point.  I don't think it's nearly as bad as the Tennessee or Auburn situations, but I get the feeling all is not happy in Gainesville, especially after the loss to Ole Miss.  This is a team that is supposed to be a national title contender, and that disappointment that comes with a loss in that situation can be palpable and difficult to get past.  My instinct tells me that they haven't done that yet.

*To put up a pre-emptive strike against accusations, let me just say that I know Sonny Shipp at Scout wrote an article with many of the same statistical comparisons between 2007 Tebow and 2008 Tebow.  I wrote this part of this article before I read that article, and the similarities are coincidental.  My inspiration for this section was not the Scout article, but rather this Advocate article, which compares the two, but not in as much depth as either Sonny's article or my own.