I think there were two solid candidates for the And The Valley Shook SEC Offensive Skill Position Player of the Week this week.  One was a maligned quarterback having a redemption day in a big win, and the other was a bruising running back who scored his team's only offensive touchdown on a bruising run and who dominated the playclock.

Either of those players would have been solid selections, and I'm going with: 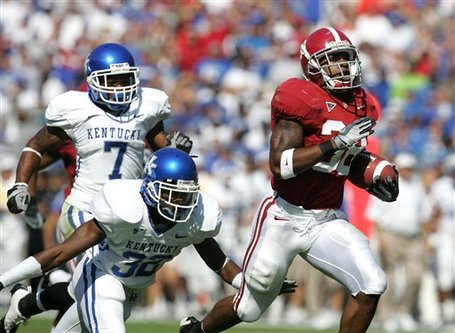 I've picked a Bama player twice now, a Georgia player three times, and an LSU player once.  I think I'm not being imaginative enough.

In a game where not a lot of points were scored, Glen Coffee was clearly the most productive player on the field, rushing for 218 yards, which was well over half of his team's offensive total.

He also accounted for most of Alabama's offensive points, scoring on an electrifying 78 yard run early in the game and rushing nine times for 57 yards on the Crimson Tide's game-clinching 4th quarter drive for a field goal that put them up by 10 and provided the winning points.

He averaged 8.7 yards per attempt, but let's take out the outlier.  He had one great run of 78 yards.  Other than that great run, he rushed for 140 yards on 24 carries, for a 5.8 yards per carry average.  And that's removing the outlier.  That's still fantastic.  In a game where Alabama had a 10 minute time of possession advantage, that is huge, even if it did not translate into a lot of points (thanks to 2 missed field goals).

With the passing game not accomplishing much (106 total passing yards), Alabama leaned heavily on its running backs, most especially Coffee, and it paid off with a win against a pretty solid and highly motivated Kentucky team.

Honorable mention this week goes to South Carolina quarterback Chris Smelley, who many people had written off as just being a placeholder while Stephen Garcia gets ready, which many people (myself included) figured would be this week.  Instead, Garcia did not get in the game and Smelley completed 70% of his passes for 327 yards in a big, season-saving win over Ole Miss.