What I Would Do If I Was Les Miles

Share All sharing options for: What I Would Do If I Was Les Miles 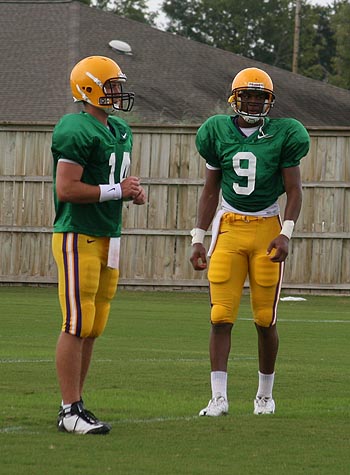 I will not join the chorus of people saying some variation of "Les Miles is stupid for not playing Jordan Jefferson."  Jarrett Lee, despite his struggles, has shown the ability to bounce back from a tough stretch.  To put in a true freshman in his first significant action at that point would have been even riskier than leaving Lee in.  And, well, he actually did bounce back and finish the game relatively well.  If we had taken Lee out at the nadir of his play, we would have missed his upswing, and things would not have been any better for us.

I would also point out that the people who are calling for Miles to put in Jordan Jefferson have never seen the kid play in college except for a few handoffs, a QB dive, and one misfired pass.  What makes any of you think he would have had success against one of the best defenses in the country in his first ever significant action as a true freshman?

But that's not what I'm asking above.  What would I do now?

I think, at this point, considering we have Troy next, I think I would go ahead and start Jordan Jefferson in this game.  It would not be because I think Jefferson is probably the better player at this point (I doubt that).  It would be to a) get Jefferson some experience leading into what I think would be an open competition in the Spring, and b) to take a little pressure off of Lee.

While Lee has been a resilient player (see the Auburn game), he has now had his two worst games of the season back to back.  He's being excoriated in the media and on the message boards.  I cannot imagine that his mind is in a good place.

I'm not saying he shouldn't play.  He should come off the bench and split time, but he definitely needs to be given a break.  A mental health week.  Then, hopefully, he can come back strong when we need him again.

I realize I am calling for Miles to pretty much exactly what I've suggested is at best a significant risk.  We don't know how good Jordan Jefferson is.  Sure, I believe based on his high school videos that he has better physical tools than Lee, but he's also a year behind Lee in terms of development.  If Lee stalls out, Jefferson will eventually catch him, but it's hard to imagine that he has already.  Lee, for all his faults, has a fair bit of talent.

No, this is not a benching for a better player.  It is an attempt to settle down the guy we are relying on to finish out this season when it counts.  And heck, if Jefferson comes out and plays great football, it's not like we're hurt any.