Share All sharing options for: Week 11: Around the SEC, Part 1 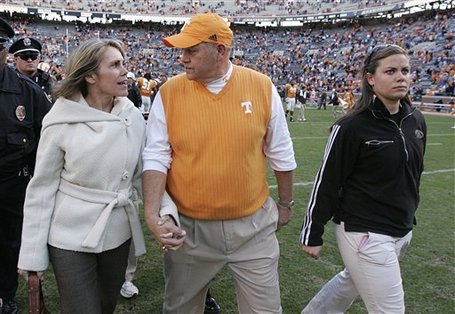 If you thought Jarrett Lee had a bad week...

Of course, there was a lot of action this weekend.  Strangely, I did not even look at the scores from the SEC until Sunday night.  It was just one of those weeks.  I don't like losing games where I think we outplayed the other team in most respects, except for the ones that ended up counting the most.  Anyway, let's get to the action

I watched this one until our game came on, and it was a shockingly good game.  Kentucky has found themselves a quarterback, and it is a true freshman.  Randall Cobb came in and made some plays, but bespeaking his status as a true freshman, he only averaged 5.3 yards per pass, got barely over 100 yards passing, and threw more interceptions (1) than touchdown passes (0).  He did rush for 82 yards and 3 touchdowns, however.

I know what you're thinking.  Kentucky is playing a true freshman quarterback while we refuse to play ours.  And, well, you have a point.  Just keep in mind that those of you calling for Jordan Jefferson to have gone into the game have not seen him throw but one pass in college.  It's not like he's a known quantity.

Anyway, that's a topic for another post, one which I addressed this morning.

What we're here to talk about now is what this game means.  This game means a) that Georgia probably never really was a serious national championship contender, and/or b) Kentucky is progressing nicely throughout the season and is now a pretty good team.  Bowl-wise, I think Georgia is solidly the 3rd SEC team in the bowl picture, which means either a BCS berth or the Cap One Bowl, depending on the breaks from here out.  Kentucky probably falls behind South Carolina for the Outback Bowl.

Arkansas's slim chances for a bowl got much slimmer.  They fell behind early, and needed a late touchdown just to make the score look a little respectable.  After a very unimpressive start to the season, South Carolina has turned into a very solid team.  With 7 wins, they are solidly in the bowl picture and the rest of the season is just about bowl positioning.  They finish up with Florida and Clemson, and a split there almost certainly means they'll get to the outback bowl, as they are probably a better draw than Kentucky.

Remember, the Outback Bowl will take the best SEC East team that isn't taken by the BCS or the Capital One Bowl.  Right now, Georgia and Florida are almost certainly going to be in the BCS or the Cap One together, unless the BCS only takes one SEC team, which appears unlikely at this point.  The BCS will probably take 2 SEC teams, and Georgia will either be the second BCS team, or they'll be the Cap One's choice, barring a late-season collapse.

As for the game, South Carolina used a two-quarterback system effectively, ultimately averaging 7.3 yards per attempt with 2 touchdowns and 1 interception.  They also rushed the ball reasonably effectively.  Arkansas helped by throwing 3 interceptions, and because they fell behind early they could never get Michael Smith going.

Pitiful.  Just pitiful.  This has to be the most disappointing team, not only in the conference, but in the whole country.  The week after your coach gets fired is when a team is supposed to rally and play their best football of the season.  They went out and absolutely laid an egg, at least offensively, They averaged 3.3 yards per play and their offense was net even on points scored versus points given up.

To make matters worse, not only did Tennessee give up a pick-six (I hate that term, but it's an effective short-hand), but they almost gave up another one, giving up an interception that was returned 54 yards to the 4-yard-line.  Wyoming missed the extra point.

Wyoming scored all 13 of its points on drives that netted a total of 4 yards.

Tennessee's defense played well.  They responded and held Wyoming's offense down the entire night.  The Tennessee offense's pitiful effort did them in.

Tennessee is now at 7 losses, the most in the conference.  They become the first SEC team to be officially eliminated from any possibility of post-season play, unless there's some rule I don't know about sub-.500 teams going to bowls if no one else is eligible.

Anyway, we'll get to the rest of the games tomorrow.