Week 11: And the Valley Shook SEC Offensive Skill Position Player of the Week

Share All sharing options for: Week 11: And the Valley Shook SEC Offensive Skill Position Player of the Week

I haven't done this all year, but now it's finally time.  This guy was the lucky recipient of the GeauxTuscaloosa SEC Offensive Skill Position Player of the Week Award seemingly every other week last year, but with the new year (and some new standards), he had not been putting up the monster numbers this year that he had put up last year.  This week, however, we are prepared to name our ATVSSECOSPPOW: 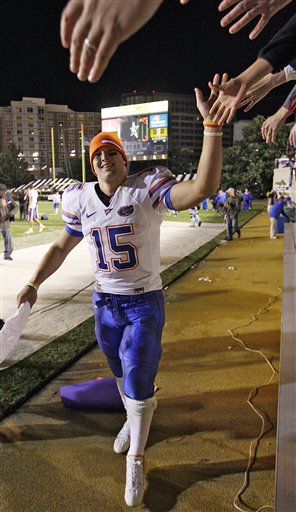 Was the knit cap really necessary?  He reminds me of "A Christmas Story".

Alright, so the numbers weren't that eye-popping when you get down to it.  Tim Tebow had 171 yards passing and 88 yards rushing.  But those touchdowns.  Three passing touchdowns and two rushing touchdowns kind of stick out.  He led his team in both rushing and passing, and accounted for the first five touchdowns Florida scored.

He single-handedly beat a pretty decent Vanderbilt team.  And make no mistake, this was an epic beat-down.  Sure, it was the closest game Florida has played since their loss to Ole Miss, but in truth they were ahead 42-0 in the waning moments of the 3rd quarter, and Vandy scored a couple of meaningless touchdowns to make it a little more respectable.

I said this morning that Florida's the best team in the country right now, and I mean it.  They aren't just beating people.  They are mauling everyone they play; even the good teams like LSU, Georgia, and Vandy.  No one even stays close to them.

Yes, there were a couple of other very nice performances this week, particularly by Glenn Coffee, Kenny McKinley, Muhammed Massaquoi, and Matthew Stafford, but this week Tebow's the man.