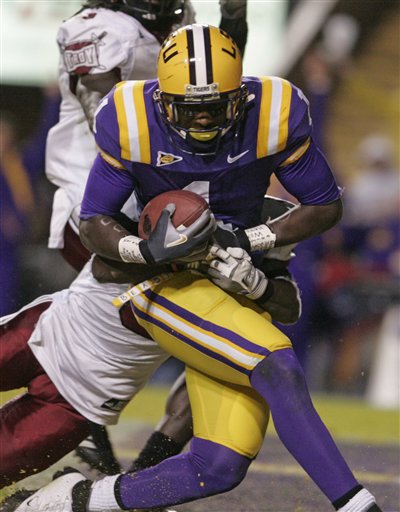 This is not supposed to be the story.  When a national power having a somewhat disappointing season plays a decent non-BCS-level team following a dramatic loss to another national power, it is supposed to a) put the game away early and coast to a boring victory, or b) lay an egg and lose.

That team is not supposed to come out and play its worst half of the season and then recover from it just in time to rescue victory from the arms of defeat.  A fourth quarter like we put up is simply not supposed to happen, especially when your team has played so poorly all night.

Actually, I shouldn't say the team played so poorly.  Sure, the offense was miserable until scoring a touchdown in the final minutes of the third quarter, but the defense actually played well all night after giving up touchdowns on Troy's first two possessions.  After that, the LSU defense held Troy to only 10 points, with the other 7 coming on yet another defensive touchdown.

The defense didn't give up much after the first quarter, but oh what it gave up sure looked like a killer.  After falling behind by 28 points early in the second half, I think most people thought the game was pretty much over.  We grinded out a touchdown late in the quarter, and that's when the floodgates opened.  Jarrett Lee, who had been having a terrible night, came alive and was 18 for 26 in the second half.  The success of the passing attack then opened up the run, and once the game was close again we were able to run the ball effectively.  The defense which had been playing passively all night became aggressive again, and was aided by a Troy team that was clearly self-destructing and playing scared.

There are certainly concerns about this team that come out of this game.  I do believe the coaches need to take a long, hard look at how the team got to the point of needing a miracle comeback against Troy to salvage a chance at a respectable season.  I'm sure I will have my own thoughts on that, but that's for later.  For now, I'm just happy we got another notch in the Win column and that we still have a real shot at a New Year's Day Bowl.

I am also still sorting out my thoughts on the fans leaving in droves.  I know it was probably a combination of the cold, the wind, and the bad football, but it sure is embarrassing that the ESPN highlights show a mostly empty stadium.

The biggest news of the game is that Jarrett Lee has ended his long streak of poor play from the quarterback position.  After 5 consecutive poor halfs of football, he had a sterling 2nd half, and led the team to a win.  That's enough reason to celebrate right there.