LSU Gets Another Commitment

Share All sharing options for: LSU Gets Another Commitment 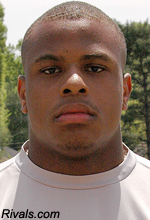 Earlier today, LSU received another commitment for the 2009 football recruiting class, this time from projected fullback Dominique Allen of Paris, TN.  Allen is built like a truck at 5'11" and 250#.  He is a specialty player who will probably never be a featured ball carrier, but he could end up being a solid contributor for 4 years in a specialized role as a blocking fullback, with the occasional carry along the way.

Despite the fact that he is not really a headline grabber, he could end up being one of the most important recruits of this class, as he is in position to literally step into a solid contributing role from the first day he is at LSU.  With Quinn Johnson set to graduate this year, LSU football does not have a single blocking fullback on scholarship unless we move someone from another position.

Allen is not all blocking, as his videos show him to be a very solidly built power runner with nice hands.  It is especially funny when the videos have an arrow pointing to him, as he is unmistakable even without an arrow.  At 250#, he is almost always the biggest player on the field in his high school games, and certainly the biggest player lined up behind the line of scrimmage.

He's not a speedster by any means, but he gets from here to there OK.  I don't think he'll ever be running wide sweeps or anything, but if he can put a linebacker on the ground he'll be doing great.