Share All sharing options for: LSU 40 - Troy 31: General Thoughts on the Fan Base 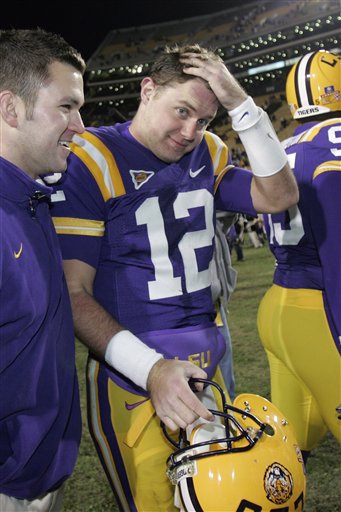 That's the face of a man who is darned relieved.

I think in a couple weeks we will look back on the second half of this game as the half of football that saved the season.  Sure, we will not be winning any SEC or national championships this year, but a 10-win season and a top 15-or-so final ranking is still available to us.  It boggles my mind whenever I read message board posters talking about how a 10-win season and a Cotton Bowl berth is somehow a profound disappointment.

A Bama fan I know recently perused the LSU message boards and told me, "Your fans suck."  Sometimes, I think she's right.  We have a handful of successful seasons in a row and all of a sudden we morph into the Atlanta Braves.  Our fans think that they somehow deserve their team to be great every single year.  And woe be unto those players and coaches who do not deliver uninterrupted and unmitigated success.

Personally, I think that the fans who are so intensely negative all the time actually deserve to be disappointed, and it's the rest of us who are not so quick to judge and not so enthusiastic in condemning the team who raise the curve on what we "deserve".

I'm not even talking about the people who left at halftime on Saturday.  I know it was cold and windy, and that all seemed lost.  I know that many people have small children who were uncomfortable, and who probably needed to go to bed.  I have one myself and I know how important it is to get a toddler to bed on time.  Leaving doesn't make you a hero, but staying does, unless you were one of the ones booing vociferously.

No, I'm not talking about them.  I'm talking about the awful message board denizens who post such hateful things, and the people who leave hateful messages on certain Facebook pages, and the people who boo the team at the slightest failure.  You people do not help, and in fact you only contribute to the damaged psyche of this team and its players, especially one player in particular.

As one astute poster commented, they seem to take a "twisted pleasure when LSU plays poorly."  Criticism is one thing, but reveling in our shortcomings is another, especially for people who consider themselves and call themselves fans.  You expect this from the opposition, not from the fan base.

I will tell a story.  The last time I went to a game in Tiger Stadium was in 2003.  I went to see undefeated LSU take on Florida.  I was seated in Section 13 near Gate 8 in the North End Zone.  There were fans in that section who booed the OPENING KICKOFF because it didn't reach the end zone.  And it wasn't one person or even one small group of people.  There was a smattering of people all around my range of hearing who booed and criticized and moaned at every conceivable juncture of the game.  And this was an undefeated team!

We lost that game.  I went home and asked the people who gave me the tickets if it was like that at every game.  I was told that it was.  The negativity of that section appears to be consistent with the negativity of the fanbase as a whole.  I haven't been able to bring myself to return to Tiger Stadium for a game since.

We played poorly in that game, but the opening kickoff showed me that it hardly mattered to the fans.  Even if we had won, they wouldn't have been able to enjoy the success because they were too busy looking for the little failures.  That's the way we are now as well.

This is not to suggest that it is not the right of a fan to criticize his team, but if all you ever do is search for the flaws in a team, I have to ask what it is about the game of football that you enjoy?  Why do you pay attention to something that does nothing but torture you?  If the game of football upsets you so much that you find nothing but flaws in a team and in a season that is still one of the better teams and seasons LSU has ever had, maybe you should consider spending your time, money, and attention on something else; something you enjoy.

Assuming we finish out this year by beating the teams we're supposed to beat, we'll finish this season ranked, possibly fairly highly.

And for those of you who think this little downturn is because Les Miles is an inferior coach, I would only point out to you that the last time LSU finished a season unranked was in 2002, when a certain other coach was in his 3rd season.  The last time we finished a season ranked outside the top 10 was in 2004, when that certain other coach was in full-on Legend Mode and had a roster full of players recruited by him and him alone.  He had disappointing seasons too, and you people sure let him know about it at the time.

So let's all just sit back and enjoy the fact that we have a football program that can view a season in the back half of the top 25 as a dismal failure.  We exist in a conference where the slightest flaws get magnified because every team has ability.  We're a little down this year, and it shows, but even in a down year we're STILL one of the best teams in the conference.  Let's try to enjoy that.

In publishing this, I speak for what I hope is a Silent Majority of LSU fans who enjoy success enough to not worry about the little failures that inevitably come with it.