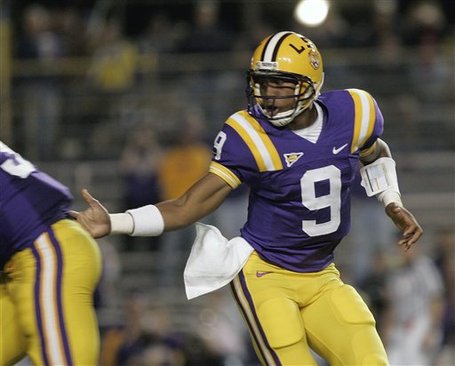 I echo Poseur's thoughts on this one.  Lee was not good last night.  I don't agree with him that the game was in doubt too long though.  I think after Hawkins' fumble return to close out the half, we could have played Jefferson and other backups the entire second half with no worry at all, especially after we went up 28-3 early in the 3rd.

I guess we wanted to let Lee continue playing to build up stats or to build confidence or something, but if so it definitely backfired.  I'm worried the interception and subsequent return might start getting to his head, like it has gotten into the heads of fans.

And boy howdy, has it gotten into the fans' heads?  Judging by the message boards and the crowd reaction, the people are getting rather impatient.

Let's just remember though that Lee, on the season, is completing 56% of his passes and he is getting about 7.5 yards per attempt.  Those two stats are pretty darn good, and he went through a 3-game stretch in which he completed well over 60% of his passes.  During that same time period, he has a 1:1 touchdown to interception ratio, so I guess you take the good with the bad.

Even if we couldn't get to an "empty the bench" scenario sooner (which I think we could have, honestly), I still would have liked to have seen us mix in the young players a little more.  Before we inserted Jordan Jefferson and crew late (which included Stevan Ridley, DeAngelo Peterson, Josh Dworaczyk, and Ernest McCoy) the only non-regular I saw get any playing time at all was young DE Sidell Corley, who got in on the series immediately proceeding those insertions.

Would it have killed us to mix in the young players a little?  We could have put in Karnell Hatcher at safety, or Ryan Baker at linebacker, or Phelon Jones at corner or nickel, or Ron Brooks at corner, or Pep Levingston at DE.  Heck, it probably would have helped, as our team seemed to lack spirit most of the night, and young players getting rare action probably would have brought much-needed energy to the party.

Sure, we won the game easily, but it was an unimpressive win in almost every respect except for the production we saw from our running backs.  We could not pass the ball at all except on the one nice drive in the second half.  On one drive, Lee was 2 of 4 for 44 yards.  The rest of the night, he was 6 for 18 for 55 yards, with 1 touchdown and 1 interception.

The pass defense held Tulane to 91 yards passing, but was also hit with 3 pass interference penalties.  The rushing defense allowed Tulane very little, but for some reason we still gave Tulane a lot of 1st downs.  Yes, we dominated, and we got the win, but it feels so unsatisfying.

I will have more on this another day, I think, but for right now I think the team is in a funk.  I don't have the insight to explain why that is except to point out a few obvious facts and to imply how they might fit together:

I think a lot of teams go through a post-championship lull.  Add that to the fact that things are not coming to us as easily as they did last year, and I think confidence is down.  We started the season with swagger, but we seem to have gradually lost it.  Last night I saw a team that had no swagger.

I think, when you look at the QB situation, you probably could not have reasonably expected better than what we have.  With two inexperienced QBs, one of whom is not greatly talented, to have found a QB who is productive is a good accomplishment.  And Lee is definitely productive.  He just has to avoid mistakes, which we can hope will come with time and inexperience.

The problems with the defense, however, are baffling.  We can't seem to stop even the average passing teams, and our pass rush is non-existent unless we put in a special pass-rushing unit that can only play on long yardage situations.  On 1st and 10 or in short-yardage situations, teams can pass on us virtually without fear of a negative play due to our lack of pass rush and inability to create turnovers.

I think our defense needs an overall change of philosophy, but that's a post for another day.

For now, I hope Les Miles and crew can get this team fired up for next week.  Right not, I don't like what I perceive as the psyche of this team, but maybe it was just a look-ahead lull.  We shall see.