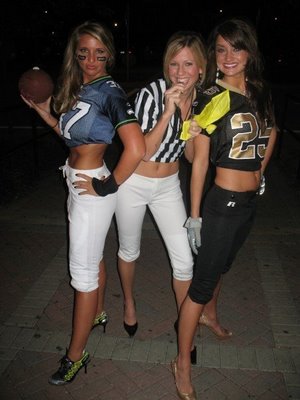 This is the second image that comes up when you google "ole miss football" without the quotation marks.  Don't believe me?  Try it.

What is there to say about Ole Miss?  They are a solid team.  Unspectacular, but solid.  They rank 5th in the SEC in scoring offense (although the teams behind them are generally considered wretched, and their own ranking is skewed by their 59 point explosion against ULM).  They are 7th in scoring defense (ahead of LSU, btw, but they give up a ton of yards where they rank 11th in the SEC).

It seems strange to me that they are 3rd in the conference in rushing offense, and that they are actually 2nd in the league in yards per carry.  I would not have guessed that, as no one on Ole Miss strikes me as being all that great of a runner.  Statistics don't lie, though, but I guess they will sometimes fib, or lie by omission.

The Ole Miss weaknesses include being last in the SEC in passing defense.  By a lot.  They are extremely vulnerable to the pass, and I hope we can take advantage of that.  Their personnel in the secondary was expected to be subpar this season, and it is meeting that expectation.  They are giving up 225 yards per game in the air, which is 16 yards more per game than the 11th place team.  It's not a fluke, as they are also last in the SEC in passing efficiency defense, which is at bottom a rating of yards per attempt with a few weighting factors thrown in.

Ole Miss is all around solid on special teams, and excels at covering kickoffs.  Who would have guessed that LSU would be last in the SEC at kickoff return average?

That's all well and good, but what should we expect?  The Ole Miss offense revolves around Jevan Snead and Dexter McCluster.  The former is a very talented passer who still hasn't quite put it all together.  The latter runs a "Wild Rebel" formation that has been effective, but not nearly as effective as the Wild Hog run by Darren McFadden was.  To illustrate, Darren McFadden was a solid passer, while Dexter McCluster has attempted 4 passes, two of which have been intercepted and the other two of which fell incomplete.  His passer rating is -100.

No, when McCluster is taking the snap it will almost certainly be a run, and while he's good at it, he's no Darren McFadden at that either.

The Rebels with Snead behind center is pretty scary, as Ole Miss has some very athletic receivers and Snead has a tremendous arm.  His arm is just about as good as Matthew Stafford's, but his decision making and accuracy aren't quite up to that level yet.

With Snead back there, they feature a running back by committee approach with Cordera Eason, Brandon Bolden (true freshman from Baton Rouge), and Enrique Davis all getting the ball several times per game.  They're very similar backs physically, as all 3 are listed at between 5'10" and 6'0" and all are listed between 220# and 224#.  Eason has been the more effective lately, averaging over 7.0 yards per carry in each of the last two games, and scoring more than 100 yards in each.

Defensively, Ole Miss features an athletic defensive line that is a very good match for LSU's solid offensive line, particularly if Greg Hardy is healthy, which is unknown to me right now.  When healthy, Hardy is one of the very best players in the conference regardless of position, and he is a handful for any tackle when he rushes off the end.

As mentioned, their secondary has problems, but if they have their best personnel on the field they will pressure the passer.  This is one of those guys where Lee will either tear it up, or get torn up, depending on how it plays out.

I think we learned our lesson last week that we cannot have success if we are one-dimensional.  We need to pass, and we need to run.  We need to be unpredictable, and passing at unpredictable times gives Jarrett Lee the best chance for success.

It's also senior night, and we'll have more on that later.