Share All sharing options for: Week 12: Around the SEC, Part 2

I'm a little late this week in getting to this segment, as I've been more interested in doing other things.  And considering the deafening silence this "Around the SEC" feature usually gets in the comments, I may consider discontinuing it, or perhaps retooling it in such a way that it features more photos of hot coeds. 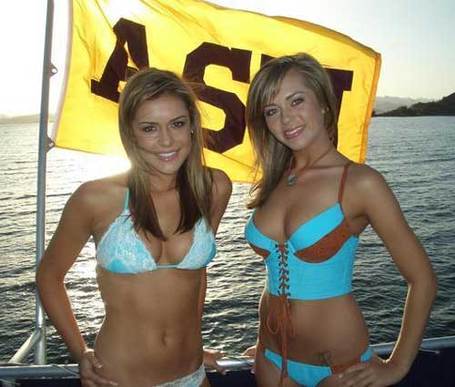 Alright, it's not like we've been silent on this game so far.  We all know what happened.  We all know that I was among the people who got pretty upset about the fan behavior, both in the stadium and on the interwebs.  But, there are a few finer points that deserve mention.

Redshirt freshman defensive back Phelon Jones got more playing time in this game than he saw in the rest of his career combined.  He was the dime, or perhaps the nickel, for much of the night, and the Troy offense focused on him heavily.

Troy threw the ball a whopping 72 times and 36 of those times they threw Phelon Jones' way.  He started a little slowly but he got better when the rest of the team got better.  Towards the end of the game, he was shutting everyone down left and right same as Patrick Peterson and Chris Hawkins were.  I'm sure it was a very memorable night for him.

I'll just say I called this one.  South Carolina is a solid team, much improved from its very uninspired open to the season.  They're solid.  Solid is good.  "Solid" isn't nearly good enough to be beat Florida.  The Gators are great.

Congrats Commies!  They have made it to 6 wins for the first time since football players wore leather helmets, which was back in the early 1980s.  As already discussed, they did it by riding their inconsistent senior quarterback, Chris Nickson, who had one of the best games of his life.

Kentucky, who had been looking good for a pretty decent bowl, slides down to one of the lesser ones.  There's still no telling which one though.