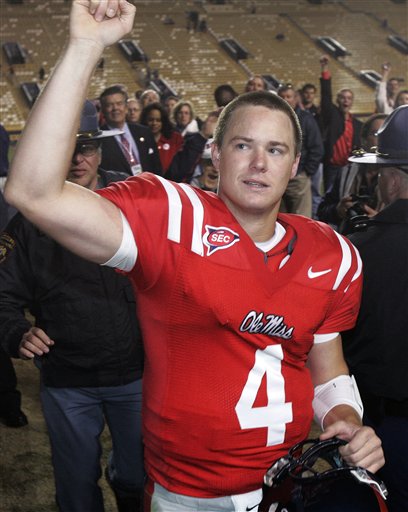 Yeah, it makes me retch too, but he earned it.

We could have gone another way.  Mississippi State running back Anthony Dixon had 179 yards rushing.  But Snead won a bigger game, and carved up LSU's defense doing it.  He was 16 of 25 with 274 yards passing, 2 touchdowns, 0 interceptions, and one long run called back for a penalty that had no impact.

The only time LSU's defense ever stopped Ole Miss was when they did not put the ball in Snead's hands.  The "Wild Rebel" was somewhat effective, but it didn't kill us.  The running backs had mediocre nights at best.  It was Snead's passing which did us in.  Really the defense played well when it was faced with a running back instead of a quarterback.

Snead is almost as physically gifted of a quarterback as Matthew Stafford is.  He maybe doesn't have the super-human arm strength of Stafford, but I think his arm strength is maybe... "extra human".  Just a shade below super-human.   He's also a competent runner.  He's a little behind Stafford in terms of polish and experience, but the skills are there.  He will be tough to handle next year as well, and I think he has an NFL future.