Week 10: And The Valley Shook SEC Offensive Skill Position Player of the Week

Share All sharing options for: Week 10: And The Valley Shook SEC Offensive Skill Position Player of the Week

I know that the Florida vs. Georgia game got a lot of press and a lot of attention, and it was definitely an epic beat-down of a pretty good team by an even better team.  Tim Tebow would be a fine pick for the ATVSSECOSPPOW, with his 5 touchdowns, 77% completions, big 3rd down runs, and his darn moxie, but there was one player in the SEC who also won a big game and put up MONSTER numbers: 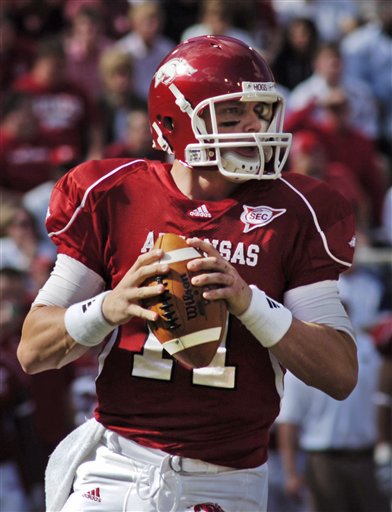 OK, so he didn't put the ball in the end zone much, but averaging over 10 yards per attempt on 38 attempts is outrageous, even when you're playing Tulsa

Arkansas QB Casey Dick has quietly put up some nice yardage numbers this season.  This is his senior year, and he's had a lot of criticism during his career (right so), but his yardage and yards/attempt are way up this year.  Then again, his sacks and interceptions are also up, and his touchdowns are down, but no one ever said he was great.

He was pretty darn good this week, though.  He was 25 of 38 with 385 yards passing, one touchdown and one interception.  385!  I'm pretty sure that's the most yards by an SEC quarterback in any one game this season.  And while there were a lot of attempts to get to those 385 yards, he averaged 10.1 yards per attempt, which is absolutely outstanding, especially if you win.

On an night when the Arkansas running game struggled, Casey Dick picked up the slack and led the team to victory.  Of course, an interception return for a touchdown also helped.

But also, let's have a little perspective here.  Casey Dick is a 5th year senior, and right now Jarrett Lee is having a better season than he is.  Lee's completion percentage (56.1%) is just slightly lower than Dick's (56.6%), but his yards/attempt is significantly higher (7.55 to 7.19), his attempts/touchdown pass is better (15.75 attempts per touchdown for Lee, 33.6 attempts per touchdown pass for Dick), and TD/INT ratio is better (12:10 for Lee, 9:11 for Dick).  Casey Dick takes better care of the ball (when you factor in that Dick has thrown almost twice as many passes), but rarely completes a drive with a touchdown pass.

So, let's cut Lee a break and let him grow into the position.