Share All sharing options for: Week 10: Around the SEC, Part 2

Having gone over 4 of the 7 games on the SEC schedule already, let's look at the last 3. 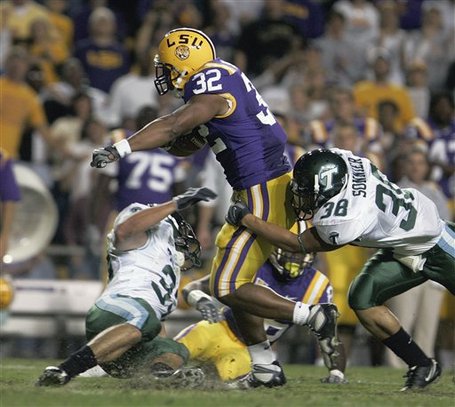 Charles Scott ending the biggest play of the night for LSU

I'm going to say what's been on my mind for the last few weeks.  Rahim Alem should get starters' minutes.  He's been our best player on defense.  Honestly, I think outside of Tyson Jackson, he's been about the only LSU defender who hasn't been disappointing this season.  Actually, I really should compliment the cornerbacks, who I think have played pretty well all season, but Alem has been a game-changer.

Alem has been the only consistent pass-rusher LSU has had, and Kirston Pittman has done very little while starting ahead of him.  Cousin Kirston has been a great story, and he was excellent in 2007, but so far this year he has not done all that much, and he seems a step slow on plays and hasn't gotten the pass rush he got last year.  Alem, while backing him up, has recorded 6.0 sacks, the most on the team.  Alem improves one of the most deficient aspects of the team simply by getting on the field, and he has not been a liability in rush defense, so play him.

I also want to give a shout-out to Perry Riley, of whom I had not been complimentary last week.  This week, he had a nice game and got in on some good defensive plays.  We're still waiting for Curtis Taylor to have a good game, but way to go Perry.

Granted, if I was putting together a ranking or a top 25 ballot, I would not have Florida #1, because I don't think that there's any reason to overlook early season failures when doing rankings, but right now there's not a team I would pick over Florida in a one-game playoff.

They dominated this game from start to finish.  Of course, they were helped by some untimely penalties on the part of Georgia and by a curious coaching decision.  Why would you do an unnecessary on-side kick when your QB is getting treatment on the sidelines and is telling people, "I can't throw"?  Even if you're successful, you only get the ball at the 40, and you don't have a quarterback to run out there.

Georgia put up a lot of yards, but as often happens when you get behind and have to pass a lot, you put up yards, but you also throw interceptions.  In this case, there were three of them.

And really, it was worse than the score would indicate.  Georgia could not stop Florida, and Georgia didn't score a touchdown in this one until the benches had emptied.

Florida now has the inside track for the SEC Championship Game, and honestly I think they'll beat whoever the SEC West throws at them, and if things work out, they'll have a shot at the BCS National Championship Game.

The big story here, of course, is that Phillip Fulmer is out as the coach at Tennessee following this loss.  But let's not lose sight of the fact that there was another team playing in this game as well.

This was a sloppy, defense-heavy (or was it just offense-light) game, but nonetheless a big win for South Carolina, who got to the magical 6-win plateau, with a good chance to pile on another win or two from here out.  They're not Georgia or Florida, but South Carolina is one of those teams that is still in the hunt for the Outback bowl.  I'll have a post later about the current bowl picture in the SEC, but right now I'd have to say that South Carolina is probably the 3rd best team in the East, and that's a spot that seems to be destined for the Outback.  We shall see.

South Carolina has a very good defense, and our win against them is looking better all the time.