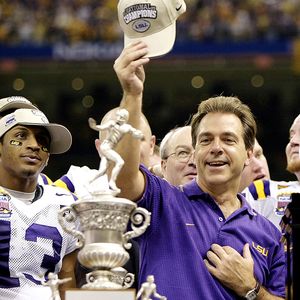 LSU's relationship with former coach Nick Saban is, shall we say, complicated.  It is definitely true that he pushed LSU into the modern era of football by upgrading facilities, upgrading recruiting strategies, and modernizing our schemed.  Then, of course, he left us and few scant years later ended up at a rival school we play every year, turning up at our high schools to talk about how he's going to do for his new school what he had done for his old school, and about how all those great players LSU had were recruited by him, don't you know.

There's been lots of discussion about why some LSU fans dislike Nick Saban.  I don't hate the guy, because he brought us a lot of success, success which has turned out to be sustainable over time.  But if you're looking for the reason why many LSU fans have taken a sour turn on Coach Saban, it comes down to the old standby question, "What have you done for me lately?"

Lately, Nick Saban has done everything he can to raid the building blocks of the LSU program to claim its raw materials for himself, so that he could use it as key pieces to build his new programs.  Despite his recent talk about how this particular game is about the players and not the coach, when he first got to Alabama he did everything he could to make LSU's success all about him, and therefore tear down the program he helped build.

When he was hired, he publicly took credit for LSU's then-current success, and deliberately used it to go into Louisiana high schools to try to recruit the best Louisiana players to Alabama.  He deliberately targeted players that were committed to LSU, and deliberately tried to sway them by explicitly taking credit for where the LSU program was.  He didn't do this to Georgia recruits or to Florida State recruits.  He did it to ours, as if he was deliberately targeting us to be his first meal.  I can't say that my fellow LSU fans are unreasonable in taking offense.

Kyle King and schexyoung can express confusion about what the deal is, but that's it in a nutshell.  Yes, he helped build us up, but now he's trying to tear us down, and he's using his former status as our program-builder to do it.  I don't see why it's so hard to understand that.

So far, he hasn't really taken anything from us, but the intent has been there.

I could also go on about how he constantly flirted with jumping ship to the NFL, leading to problems at LSU, including a very subpar recruiting year in 2002.  I could talk about his decision to voluntarily leave the NFL job he then got, after only two years, to take on a job at a rival school.  I could also talk about how the announcement was timed to coincide with (and steal the thunder from) LSU's 2006 Sugar Bowl contest with Notre Dame (which I realize took place in the calendar year 2007, but that's beside the point).

But make no mistake about it.  Nick Saban will do anything and everything he can to take that away from us, and as a former LSU coach, he was and is in a uniquely strong position from which to try it.  Sure, every Alabama coach will and rightly should try to nip a little of the flesh off of LSU, and LSU should do the same, but Saban can more effectively than most try to unspool the thread here at LSU, because he is to some extent (though less so than he is often given credit for) the one who threaded it.

More on this game tomorrow.