The supposed LSU assistant coaching search has taken many a twist and turn.  Early rumors had LSU firing the entire defensive staff plus at least one offensive coach.  Other rumors had absolutely nothing happening on the coaching front, meaning LSU would enter 2009 with the exact coaching staff it had in 2008.

Obviously, it's hard to reconcile competing rumors that have Miles firing more than half his staff versus Miles keeping the entire operation intact for another year.  It's just the natural process of the rumor mill.  Everything gets thrown at the wall until something finally sticks.

For my money, the rumors that ring the most true are the ones that have Miles hiring a full-time coordinator, moving the co-coordinators back to coaching their positions, and bringing in a new defensive line coach, with possibly a little movement on the offensive side of the ball due to a coach or two taking other jobs.  I do believe that the 2009 season will see another coach in charge of the defense, a true defensive coordinator with experience. 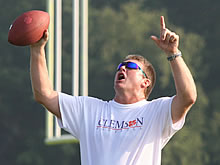 For a while, that looked like it would be former Clemson defensive coordinator Vic Koenning (the guy who famously said that Clemson couldn't compete for recruits in Alabama because they wouldn't buy Escalades), but he ended up taking a job at Kansas State, his alma mater.  Rumors had it that he wanted LSU instead, but went to K-State when he couldn't get a final decision from LSU (keep in mind, technically the position is not open).  Other rumors say he was using LSU as a fall back in case he couldn't get K-State. 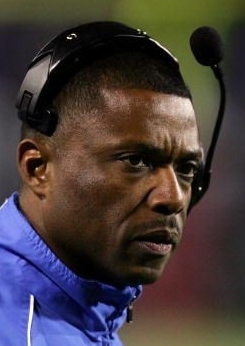 A lot of people have suggested current UCLA defensive coordinator Dewayne Walker.  He certainly looks the part.  There are currently no hot rumors about him, and it is suggested that he a) wants to be a head coach, and b) maybe wouldn't want to leave the West Coast regardless.  It seems like a long shot that he would come to LSU even if Miles wants him, and if he would it would probably be for only a short engagement while he waits for a head coaching job somewhere else.  He has a great reputation though. 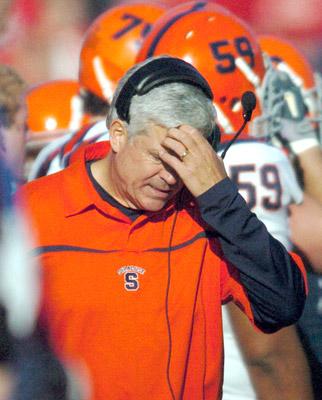 The latest hot rumor has LSU looking to hire former Syracuse head coach Greg Robinson.  His tenure as head man at Syracuse could be fairly characterized as disastrous, but his resume as a defensive coach is pretty solid.  He's spent a lot of years in football, at both the college and NFL levels.  While he's not exactly a fresh face on the scene, he knows football.

Robinson's last job as a coordinator was at the University of Texas, where he was in 2004 after being fired by the Kansas City Chiefs.  He spent only one year at Texas before taking the head coaching job at Syracuse.  That year, Texas went 11-1 and went to the Rose Bowl and beat Michigan.  The only loss that season was a 12-0 loss to Oklahoma, which went on to the BCSNCG.  That was, of course, a very talented team led by an emerging Vince Young.  As for the defense, they gave up 37 points to Michigan and 35 points to Oklahoma State, but otherwise did not give up more than 23 points to any opponent on the season.  That's pretty solid, even for a pretty talented group.

I don't know much about Robinson, but as long as he still has a passion for the game, I can't see getting upset if he is ultimately hired.