First, let me just say that this is not a website for going over the daily rumor mill.  The rumor mill churns every day on both the recruiting front and the coaching front.  While I am interested in reading about the rumor mill, I am not so interested in writing about it.  It takes a lot more effort to write the rumors than it does to read them, and there are other websites where you can get the minute-by-minute blow on the rumors.  We prefer to let the rumors evolve for a few days and then give our take

No, that's not what we do here, and it's definitely not what we do best.  What we do here is give a bigger picture and our own unique perspective on whatever the topic is.  Today, we are going to cover the latest in recruiting.  We'll start with some recent commitments:

Athlete Morris Claiborne was a kid who was completely off the radar of the big recruiting services, and committed to LSU as a 2-star.  I can shed a little light on how this happens.  If a guy does not go to any of the camps (the camps cost money), don't attend the big feeder schools (Shreveport-Fair Park certainly is not a feeder school), and don't submit video, the recruiting services just won't find him.  It's as simple as that.  There are thousands of athletes that the recruiting services haven't seen and don't know anything about.  Most of them are not going to be college stars, but some of them will be.

Morris Claiborne is a guy who did not attend any recruiting camps and did not submit any junior film.  As a consequence, neither Rivals nor Scout knew anything about him, and to be honest it's entirely possible that the LSU coaches didn't know anything about him either until he blew up in his senior year and led Shreveport-Fair Park to a surprise berth in the playoffs, with Claiborne as their quarterback.  He won a scholarship offer and accepted on the spot.

Since then, Morris Claiborne has submitted his senior film to both Rivals and Scout.  I have watched his film.  He is an impressive athlete, but I can't take too much from what I saw because it was apparent that the competition he is going against in the videos is laughably bad.  You see opposing players literally standing still.  Not "appearing to be standing still because Morris Claiborne is so fast", but actually literally standing still and allowing Claiborne to run around him.  You also see opposing tacklers actually walking in his direction.  I always question how much you can really know about a football player by watching 2 minutes of his highlights, and this is a case where one must take it with an even bigger grain of salt than usual.

Claiborne anticipates starting his career as a quarterback.  He looks impressive, but don't believe the hype when you read someone write, "He looks like Joe McKnight out there."  Slow down a little.  He's a nice looking prospect, and I believe he is probably due to be bumped up to 3-star status, but I would be surprised if he goes any higher than that.  He may develop into an awesome college player, but he is still a pretty big unknown to the general public. 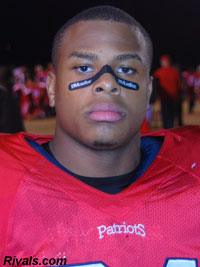 Bruising Tennessee fullback Dominique Allen may have the distinction of being the first of the 2009 recruiting class to make an impact at LSU.  He is a pure fullback who figures to be right in the mix as a starter at LSU from opening day.  With the graduation of Quinn Johnson, LSU has no other pure blocking fullback on the roster.  It is possible that the coaches could move T-Bob Hebert or Tyler Edwards into that position (from center and tight end respectively) but other than that it looks like Dominique Allen is going to be the only lead blocking fullback on the roster next year.

When Lane Kiffin was announced as the new head coach at Tennessee, there were some anxious moments, where many people thought Allen might reconsider his commitment and steer back towards Tennessee, where he had previously been committed.  He now appears to be more solidly committed than ever, and is apparently trying to recruit his buddy, a Florida lean, to LSU as well.  This gentleman does not appear to even be considering LSU, and it's far from certain LSU would have room for him, but you like the effort our guy is putting up. 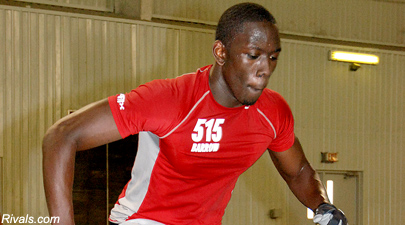 Lamin Barrow is a linebacker from John Ehret HIgh School in Marrero.  He is listed as a 3-star on both Scout and Rivals.  He was at one time a 4-star on Rivals, but his lack of offers got him bumped down.  He finally got an offer from LSU and took it.  If his videos are any indication, he needs to learn to play more aggressively and with a more assertive first step.  He's up to 220# and lists a 4.7 second 40 yard time.  Those are both fairly ordinary measures for a high school linebacker, but he reportedly is down into the 4.5's with his speed, which is quite good for a linebacker.

"He's a very mature kid," [John Ehret Coach Billy] North said. "He's not full of himself and doesn't read his (press) clippings. He's got a calm demeanor and doesn't say a lot. He's a fun kid to be around who is very down to earth. He's all about his team. He's a very unselfish player."

"He can run and cover open space," North said. "At 218 he's big enough for us but he's not big enough for the SEC but I'm sure in a year he'll be weighing 240 and still run in the 4.5s. He'll be a great player and a player that will stop the run. But he'll also be that inside linebacker who can also cover a third receiver when people try and stretch the field on LSU's defense. I know his best football is in the future and that he certainly has a lot of upside to that football future."

While I think Coach North may be blowing a little smoke about Barrow being able to cover 3rd wideouts in a spread attack (has he seen the receivers in the SEC?), you have to like his judgment of Barrow's character.  Barrow had already committed to LSU at the time this article was printed, so he had no need to push his player on schools at that point.

Still, despite North's words, if the film is any indication (and heaven knows it might not be) he has a ways to go.  He will simply have to learn to throw his body around more at the college level than what is shown there.  Still, a kid like Lamin Barrow could end up being exactly the kind of kid who responds well to coaching, becomes a great teammate, and develops into a player.

It is true that Barrow's offer from LSU came on the heels of the handwriting being on the wall that some of the out-of-state linebackers we covet were not going to come to LSU.  Backburner recruits sometimes develop into great players, however.