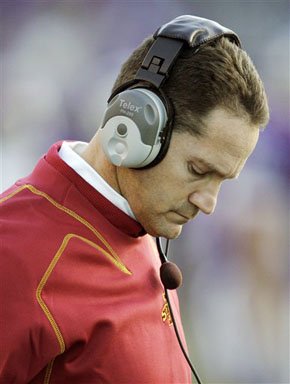 Something is wrong with the hiring of Gene Chizik.  There's something dishonest about it.  I don't know what it is, and I'm only going on my own surmises and thought processes here, but I think this whole thing is not on the level.  I don't know why Chizik was hired, but I think it has absolutely nothing to do with anyone thinking he's a good head coach for Auburn.  Maybe it's sabotage.  Maybe it's blackmail.  Maybe it's patronage.  Who knows, but this is the only category of explanations that makes any sense to me.

I am a lawyer.  One of the skills that is very important to a lawyer is to be able to see things from a point of view other than your own.  You must do this in order to analyze the other side's position and gauge their strength.  I think it's one of the things I do well.  I think I can look at a given decision and analyze why a person thought it was a good idea at the time.  Even if a decision was a terrible one, most people do what they think is the right thing at the time.  Even if their thinking is muddle-headed, there is always at least some sort of bizarre logic to it.  It may be laughably wrong logic, but you can usually see how SOMEONE could think it's a good idea.

This is what gets me about the Gene Chizik hire.  For the life of me I cannot figure out what made the Auburn "brain" trust think this was the right way to go.  What is there about Gene Chizik that says, "He's really deserving of stepping up in class."?  Is it the excitement he creates on the recruiting trail?  No.  Is it his record of success as a head coach before this year?  No.  Is it the respect and admiration he's earned from the Iowa State faithful?  Not even close.  Is it the alumni dollars that are sure to pour in based on this hire?  If AUshorecm's comments below are any indication, that's a big fat "no" too.  Is it the excitement he generates among the fans?  I'll let Track 'Em Tigers' Jay Coulter answer that one:

Auburn is not your school. It's not mine. We love it and we care deeply about it, but right now it belongs to someone else.

It belongs to a handful of people who don't care what you think or how you feel. To them, the Auburn Spirit is nothing more than a slogan for a television commercial. Real Auburn people don't mistreat a coach who gave back as much as he received. They don't drag good families through a week of hell at Christmastime. Real Auburn people don't board planes in the cover of darkness to stab good people in the back. This is not the Auburn we grew up loving.

I cannot reconstruct any sort of logic for this hire.  If there is a good explanation for Jay Jacobs' and Jay Gogue's decision, it is an inscrutable one.

A wise man once told me that when you're investigating something, the truth always fits the facts you know.  The only thing I can come up with that fits the facts I know is the conclusion that this hire is not on the level.  Something is wrong with it, and not just that it's a bad idea.  It's more than a bad idea.  Lots of things are bad ideas.  This is an indefensible hire.

Let me explain further.  Recruiting is one of the primary means of improving or maintaining the quality of a program.  In order to be a good team, you have to beat or match your opponents on the recruiting trail.  In doing that, you have to convince 17 or 18 year old kids that your program is a good place for them.  Perception is key.  If the 17 or 18 year olds perceive that you're going nowhere, they will not want to play for you.

Guess what?  The entire Auburn nation believes that the program, under Gene Chizik will go nowhere.  The damage then is already done.  The 17 and 18 year olds are already lost.  As are the 16 and 17 year olds who they will have to recruit next year.  Before Chizik has even set foot on campus, he has lost one of the primary battles he will have to fight.  It takes a lot of great coaching to make up for the fact that the battle for superior talent is already lost.  And, uh, Chizik doesn't have a history of being very good at winning with inferior talent.  Some coaches can win, sometimes, with inferior talent.  Gene Chizik, as head coach, has beaten Iowa, Kansas State, Colorado, South Dakota State, and Kent State.  That's it.  He's actually 1-1 against Kent State.  He's also lost to Baylor, UNLV, and Toledo.

This is why, when a new coach is hired, it is important to "win the press conference."  This term is sometimes ridiculed, but there is a kernel of truth to it.  A new coach has to generate excitement in the program or it digs a hole that is hard to get out of.  Auburn and Chizik have already lost the press conference so dramatically that it is rumored there won't even be a press conference.

It is so bad that I cannot help but suspect it was made for reasons other than football.  I don't know what those reasons are, but something tells me this is not on the level.

I never in my life thought I would feel sorry for Auburn fans like I do right now.