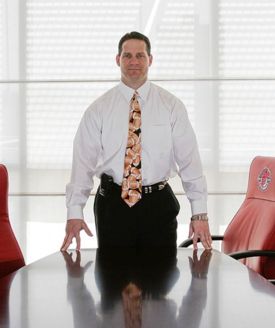 For some reason, this picture reminds me of the movie Sex, Lies and Videotape.

This week, we will go over each of Gene Chizik's victories as a head coach.  Fortunately, because there are only five such victories, we can do this entire project in one week.

It was a rough start to the Gene Chizik Dynasty at Iowa State, as the Cyclones lost their opening two games, to Kent State and Northern Iowa, both at home, and neither game was particularly close (they lost by 9 and 11 points respectively to Kent State and Northern Iowa).  Desperately needing a win, Chizik led his Iowa State Cyclones against the 2-0 Iowa Hawkeyes in a home game in Ames, Iowa.  A loss here would pretty much end Iowa State's already flagging bowl hopes.

Iowa State was led to victory primarily by senior placekicker Bret Culberson, whose 4 field goals in the first half (including 2 from 40 yards or more) allowed Iowa State to race out to a quick 12-0 lead.  The Hawkeyes were not done, however, as Iowa quarterback Jake Christensen led them on a torrid comeback that included his own 11 yard touchdown run.  Following that touchdown and an Austin Signor field goal before the start of the 4th quarter.

With Chizik's Iowa State team leading 12-10 heading into the fourth quarter, Bret Culberson missed a long field that would have given Iowa State a little breathing room.  A couple of exchanged punts later, Iowa went on an 8 play 35 yard drive that ended with a go-ahead Austin Signor field goal.

With the score sitting at 13-12 in favor of Iowa with less than 4 minutes on the clock.  It was do-or-die time for Chizik and the Cyclones.  Iowa State got the ball back at its own 33 yard line.  After a couple of quick 8 yard plays and a 3 yard sack, Iowa State had 2nd and 7 from their own 46 yard line.  Quarterback Bret Meyer then completed a 38 yard pass play to backup quarterback Philip Bates, who also played wide receiver.  It was the longest play from scrimmage of the game for either team, and it set Iowa State up at the Iowa 16 yard line.

The Cyclones then milked the clock to set up a game-winning field goal try.  I hate setting up a field goal try when you have a chance to get a touchdown, and I am generally of the opinion that if you do this in college, you deserve to lose.  This time it worked, however, as Bret Culberson knocked his 5th field goal of the day through the uprights for the go-ahead score.

Iowa kick returner Darrell Johnson-Koulianos made it interesting with a long kickoff return, but he was finally tackled at the Iowa State 25 yard line, and the game was over.

It wasn't a resounding victory.  Neither team amassed over 300 yards of offense, and no offensive player had a standout game for either team.  Placekicker Bret Culberson was the clear star of the game, going 5 of 6 on field goal attempts, including 2 from 40 yards or more and a near-last-second game winner.

Iowa State sat at 1-2 on the season, and it appeared that the Chizik era might have some positive results.  After a terrible start, the Cyclones scored a genuine upset over a team that had yearly aspirations of bowl games.  Hope pervaded the atmosphere, but the hope was not to be realized, as it would be almost two months before the Cyclones would win again.  This, alas, was probably the biggest win of Chizik's tenure at Iowa State.