Recruiting Update: Part 2, Who Do We Think We're Getting?

Share All sharing options for: Recruiting Update: Part 2, Who Do We Think We're Getting?

We'll get back to our unseemly obsession with the Gene Chizik story in the afternoon.  This morning, as LSU has returned to the practice field, we go back to our series on recruiting.

Last recruiting update, we talked about the last three players to commit to the 2009 LSU football recruiting class.  Today we take a look at those who are not yet committed but who everyone pretty much agrees are going to end up as Tigers.  This is a pretty solid group here and will help form the nucleus of this recruiting class.  Let's get started. 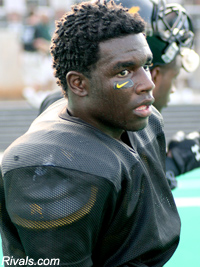 This is consensus 5-star strong safety Craig Loston from Aldine, Texas.  Both Scout and Rivals list him as the #1 safety prospect in the country.  He is first cousins with fellow LSU recruit Russell Shepard, who is the #1 rated quarterback in the country according to Rivals.

This kid promises to be a cornerstone player for LSU for several years, and will compete for playing time immediately.  He appears to have no weaknesses as a safety.  He's an aggressive, hard-hitting player, but he also seems to be a fundamentally sound tackler.  He has good ball skills as evidenced by his interceptions and his play on the offensive side of the ball.  And finally, he has the speed to close on receivers.  He may even have a future as a returner, but I won't go as far as to predict that.

And to top it all off, much like his cousin Russell Shepard, Loston appears to be a high-character kid.  If you're looking for a weakness, you can point out that LSU is actually the third school he has committed to (but some don't consider him a commitment yet).  Early in his high school career, he committed to Texas A&M.  Earlier this year, he committed to Clemson.  Ever since then, however, he appears to have been all about LSU, and appears to have a great relationship with Les Miles.  All things considered, I think his multiple de-commitments doesn't really say much about him.  Sometimes these things do indeed speak volumes, but that's usually when it's accompanied by other signs of trouble, such as when Luther Davis had multiple commitments and other issues going on with his recruiting.

No, this is a great kid, and one who may very well see immediate playing time, and not just on special teams. 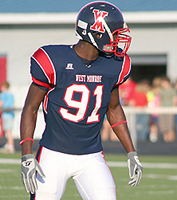 This is Barkevious Mingo from traditional LSU feeder school West Monroe High School.  Mingo is an interesting kid.  He does not have a whole lot of experience playing football, and most think that means he will have to understudy for a year or more before he is really ready to contribute.  His junior year of high school was his first time playing organized football.

Think about that for a second.  This kid never played organized football until he was a junior in high school, and yet he opened this recruiting season as a consensus 4-star player on both Rivals and Scout.  A kid's junior year is the most important year for his recruitment.  It's the year that coaches most look to in deciding who to offer and who to target.  Many teams have their recruiting classes halfway finished before the senior year even starts, and few players earn scholarship offers from major programs based on senior year production (Morris Claiborne and Lamin Barrow are two exceptions).  This kid started his junior year having never been coached, and still managed to attract the attention of schools around the country.

He is listed as a linebacker, but may grow into a rushing defensive end a la Kirston Pittman or, even more hopefully, Jevon Kearse.  Jevon Kearse is the player that most often is the subject of comparisons with Mingo.  Like Kearse, Mingo is very tall (6'5"), is lightning quick, and has long arms.  He has a very high level of athleticism, and a big frame for putting on more weight.  He is listed at 210#, but may be bigger than that by now.

As a prospect, Mingo may be a boom-or-bust type.  He could end up being an All-American.  Or he could disappear on the depth chart.  You just don't know, because he is so raw.  He appears to have a high ceiling, but high-ceiling players are always risky because they may never approach that ceiling.  The good news for Mingo is that LSU's linebacker situation is not exactly intimidating for a new recruit.  We appear to be missing out on all the national-level linebacker recruits we've targeted (with one or two exceptions maybe), and of last year's linebacker class only Ryan Baker appears to be a can't-miss prospect.  That leaves a lot of room for a strong-side linebacker like Mingo to manuever. 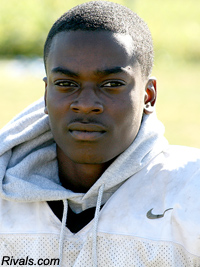 Wide receiver Andre Debose is part of the Seminole Trio, which also includes defensive end Dyron Dye and safety Ray Ray Armstrong.  LSU has been recruiting all three of those players, but only Debose appears to be likely to sign with LSU.  He is out of Seminole (hence the titular "Trio") High School in Sanford, Florida, and he is an electrifying athlete.  He is a little small for a wide receiver at 6'0" and 170#, but he can fly.  He is also quick enough to warrant a good long look at punt returning.

Debose was recently upgraded to 5-star status on Rivals, and had been a 5-star on Scout for a while.  He merits such high marks because he is incredibly elusive with the ball in his hands.  His videos show him juking defenders out of their shoes, and then running away from them when he gets into the open field.

Just in watching his videos, he seems to be a little raw as a receiver, but that may be deceiving because his videos come from his junior year.  He reminds me a lot of Skyler Green, who was also fast and elusive and appeared to be developing into a great player before his career got sidetracked by an injury that slowed him down.  He reminds others of Percy Harvin, and I think it's certainly possible he could have a Harvin-esque career here at LSU.  We may be getting ahead of ourselves by making that comparison, but keep in mind that Harvin and Skyler Green were pretty similar players in terms of style.  Both were undersized receivers who were quick and fast, and ran a lot of reverses and things like that.  Unlike Green, Harvin lined up in the backfield a fair bit, but Green probably could have done that as well, as he was initially recruited as a running back, but simply none of his coaches (Jimbo Fischer was his OC for his entire career at LSU) ever tried it with him.  Harvin and Green were similar in style, but Harvin is just better at it.

I think you can fairly say that Debose's upside is to be another Harvin.  His downside is probably Skyler Green territory.  Still, that's not a bad downside at all.  Whatever happens with Debose, he will enter a very crowded depth chart at LSU.  He would primarily be competing for playing time with other smallish receivers like Chris Tolliver and Jhyryn Taylor from the 2008 recruiting class, and Kenny Bell from the 2009 recruiting class.  Not to mention there's the possibility that Drayton Calhoun and Morris Claiborne could be trying to get time at slot receiver.

This is all to say that any receiver that breaks out of that pack and gets playing time will be a pretty special player.  Debose could be that guy.