In Part 1 of the Recruiting Update, we took a look at the last three recruits to commit to LSU (Morris Claiborne, Lamin Barrow, and Dominique Allen).  In Part 2, we took a look at 3 other players who are not currently committed, but who are widely expected to end up in purple and gold.  Today, we take a look at the remaining players on the board and who we would really like to have (among the ones we have a real shot at getting).

Keep in mind that LSU has 20 commitments already, and with the 3 listed on the previous post, we would have 23.  That leaves only a scant bit of room for other players.  Just to remind the readers, you can only add 25 new scholarship players in a calendar year, and can only have 85 on the team as of (I think) August 1 of any given year.  I expect we'll sign more than 25, expecting an academic nonqualifier or two, and maybe asking a player to wait a year to join the team otherwise in order to make the numbers fit.  Anyway, keeping in mind that we probably aren't going to go any higher than 26 or 27 signees this year, let's look at who is left on the board. 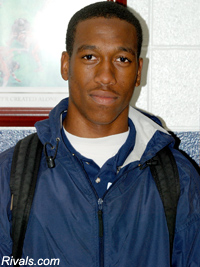 This gentleman is almost certainly the #1 player on LSU's board at the moment among the uncommitted players.  His name is Reuben Randle, from Bastrop, Louisiana.  He has been a 5-star recruit from the word go, and was recently upgraded to the #1 overall player for the 2009 class, per Rivals.com.  He is a tall, rangy wide receiver with good speed, great hands, and outstanding body control.

Personally, I think that upgrading him to #1 overall is kind of fishy.  I normally hate conspiracy theories, but I think it sells a few more subscriptions when you get to bloviate endlessly about "Who's Going to Sign the #1 Player in the Land?".  Randle's one of the few top players who isn't verbally committed anywhere and for whom there is still a fair bit of drama.

Which is not to say Randle is not an outstanding player.  He clearly is.  He is one of those players who would thrive in any system.  He is going to be an outstanding outside receiver at the next level.  Considering he is the #1 wide receiver prospect in the country, there is great temptation to compare him to Julio Jones and AJ Green, the top 2 guys in last year's wide receiver class.

He is most similar to Julio Jones, in that he is a tall outside receiver with great hands and body control.  His body is also physically mature like Jones's and it appears he can step right in and be a player wherever he goes.  The only thing Jones has that Randle lacks is the strength on the ball after the catch.  Once Julio Jones makes a catch, he has a certain Earl Campbell-like quality of being hard to tackle.  Randle doesn't really have that, though he is fast like Jones.  AJ Green is more of an explosive receiver, an athlete playing wideout, but also with terrific hands.  Randle, I think, is a little more polished, if not quite as explosive.  One might say then that Randle splits the difference between Julio Jones and AJ Green.

Which is not to say Randle isn't a great athlete.  He played quarterback for the Bastrop Rams this year, and it is said that if he wanted to play quarterback in college, he would probably be a 3-star dual threat recruit.  He is speedy and has a surprisingly good arm.  It is reported that some schools (Michigan) are trying to use the prospect of playing some quarterback as a lure to get him there.

And this brings us to the ultimate question of where Reuben Randle is going to go.  The message boards couldn't be more anxious on this question, and some say that he is going to forsake LSU and head off to Bama to be Julio Jones's wingman for the next two years.  There are rumors of a rift in his family, some of whom do not think highly of the LSU coaching staff.  Reuben himself stays very quiet about what's going on, which only feeds the rumor mill.

Personally, I am optimistic about Randle ultimately picking LSU over his primary out-of-state suitors (who are Bama, Oklahoma, and Miami, in descending order of likelihood of signing him).  He has been to LSU many times for games and for unofficial visits, including one last week.  He has several high school teammates going to LSU, including Kentravis Aubrey and fellow 2009 recruit Josh Downs, as well as hopefully Deangelo Benton if he ever makes his grades.  His coach and his school are heavily supportive of LSU, and his family has been on good terms with Les Miles.  It is by no means a done deal to LSU, but I think there is much reason to be hopeful that Randle will make the right choice, which is to say the right choice for ME. 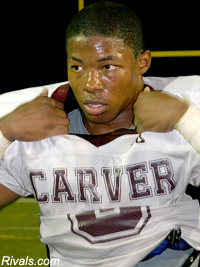 It's no secret that LSU wants to sign two safeties in this class.  It appears that they will sign Craig Loston, but who the second safety will be remains a mystery.  It looks like the one they want is Darren Myles of Carver High School in Atlanta, Georgia.  Myles is a high 4-star on both Rivals and Scout.  He is a prototypical free safety who would be an excellent complement to Craig Loston.

Myles is a speedy player, listing a sub-4.5 40 time.  He has great ball skills and cover skills for a safety.  In term of athleticism, he is not far from Craig Loston, but Loston appears to be more polished at this point.  Plus, where Loston is very aggressive on the field, you would like to see Myles get a little more aggressive.  He looks a bit like a tweener, not quite a cornerback and not quite a safety, something sort of in between.  He will just have to learn to play the position a bit more at the college level.

Myles is out of Atlanta, Georgia, but he is originally a Louisiana product.  His family relocated from Louisiana following Hurricane Katrina and settled in Georgia.  This is why LSU has his ear.  I firmly believe that Myles would probably be all-LSU if his family was still in Louisiana, but he's spent the last 3 years seeing a bit of the larger world and it may suit him.

Bama appears to be the major competition for him, and at this point I would say that he is more likely than not going to sign with Bama, but LSU has reportedly made up some ground lately. 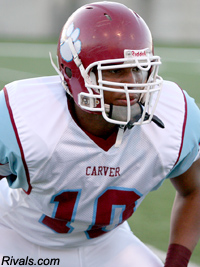 If there is one complaint that could be made about the efficacy of LSU's recruiting lately, it has been the inability to attract high-level linebacker recruits.  I think it has mostly been a result of a combination of the lack of high-level in-state linebackers produced, and dumb luck of just losing out on the ones we target from out of state, which considering the success we've had in recruiting you can't really say is anything other than luck.  That luck could change with Jarvis Jones out of Carver High School in Columbus, Georgia.  (As an aside, those Georgians sure do like that George Washington Carver.  Both Jones and Myles go to a Carver High School in two different cities.)

Jones is 6'3" and about 225# and plays very aggressively.  His videos show Jarvis Jones zipping and weaving his way through traffic to get to a ball-carrier before unloading into him with a hard hit, while making sure to wrap up as well.  He also displays very good athleticism by jumping high into the air to intercept or bat away thrown balls.  He is a high 4-star on both Rivals and Scout.  He is an outstanding linebacker prospect, and the coaching staff has been recruiting him heavily all year.

Recently, he appeared to be likely heading to Baton Rouge to play football at LSU, but it appears his recruitment may be a casualty of the 7-5 season.  Word is that Urban Meyer did some of his famous negative recruiting and turned Jarvis Jones against us.  Now LSU has some work to do.  However, the changes coming to the defensive coaching staff may help make up that ground.  Who knows?

If he does not pick LSU, he will likely choose between Florida (who is putting together a monstrous linebacker class with or without Jones), Texas, and in-state Georgia who is making a late push. 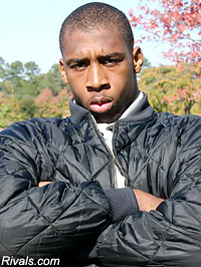 The 2008 version of the LSU Tigers lacked a good pass rush in the base 4-3 set, particularly when Rahim Alem was not in the game.  This was one of the many problems the LSU defense had, and one of the things LSU wanted to work on in recruiting.  However, outside of Texas defensive end Michael Brockers, LSU has had a tough time convincing out of state defensive ends to come onboard.

Greenwood, South Carolina defensive end Sam Montgomery is one guy who is still out there considering LSU and who looks like a solid pass-rushing specialist at the next level.  He has the long arms and the athleticism you expect to see out of a right-side defensive end.  He stands between 6'3" and 6'4" and is somewhere between 230# and 240# depending on who you believe. He is a high four-star on both recruiting services.

As it stands, LSU has a young pass-rushing defensive end on the roster in Chancey Aghayere, but it is not known if he will ever fully recover from his high school injury, or what kind of player he will be.  Adding a guy like Sam Montgomery would be a real boost to our defensive line.  It will be hard, though, as South Carolina is a tough place for LSU to recruit.  He has recently said some very positive things about where LSU stands, but I'm going to continue thinking he stays somewhere in the Carolinas until he says otherwise.