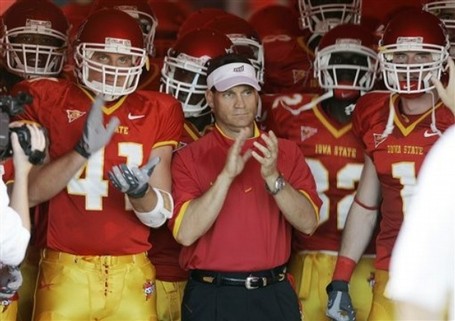 We are at the Hump Day edition of the Gene Chizik Victory Watch, Preliminary Edition.  When we left off yesterday, the Iowa State Cyclones had run their record under first year coach Gene Chizik to 2-8.  One week later, they were to face another 5-win team looking to get its 6th victory and a bowl invitation.  Which brings us to

It did not start out pretty for the Cyclones.  The teams traded punts throughout the first quarter, but then Colorado, on its second possession, went on a methodical 9 play 49 yard drive in which Cody Hawkins was 4 for 4 passing and scored a rushing touchdown to give the Buffalos a 7-0 lead.

Colorado would go on to score two more touchdowns before the half ended, and the Cyclones went into halftime down 21-0.  To say things looked grim would be an understatement.

Whatever Mean Gene said to the boys at halftime worked, however.  They came out in the second half fired up.  They stuffed Colorado on 4th and 1 on the opening drive of the half and so got good field position, and drove 43 yards in 3 plays for a touchdown.  Two more 3-and-outs and subsequent touchdowns later, Iowa State had tied the game at 21-all, heading into the 4th quarter with the ball in the red zone.

A few plays into the 4th quarter, the hero of the Iowa game, Bret Culberson, booted a short field goal through the uprights and Iowa State took its first lead of the game.

The game was not over, but the Iowa State defense continued to play tough.  They forced punt after punt in the second half, and finally Iowa State was able to put some distance between themselves and Colorado by going on a 6 play 43 yard drive that was aided by good field position from another Colorado turnover and a 15 yard personal foul penalty.  Alexander Robinson rushed for 28 yards on 5 attempts and scored the touchdown.  With a 31-21 lead and only 4:07 to play in the game, a contest which once seemed firmly in the Buffalos' grip (ha!  Buffalos don't have hands!) was most decidedly slipping away. 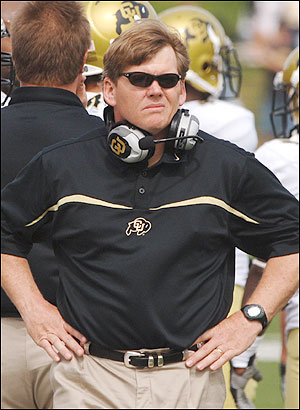 Colorado was not finished, as they marched right down the field on the ensuing possession in the two-minute drill and scored a touchdown to close the gap back to 3 points.  Colorado used their timeouts to preserve the clock on the ensuing Iowa State possession and got the ball back at their own 27 yard line with 1:27 to play and needing a field goal to force overtime.

Dan Hawkins completed two quick passes for 31 yards down to the Iowa State 42 yard line and it looked like the Buffalos would have a real chance.  A few plays later the Buffalo receiver could not get out of bounds and the clock was quickly racing to zero.  Facing 4th and 1 from the Iowa State 33 yard line, Colorado's Kevin Eberhart nailed a 50 yard field goal that was called back for delay of game.  Then, he nailed a 55 yard field goal that was negated because time had run off the clock.

Alexander Robinson was the star of the day for Iowa State as he rushed for 127 yards and 2 touchdowns.  A good day by Cody Hawkins, 23 for 40 for 262 yards, was wasted.

Iowa State would fail in their bid to end their season on a 3 game winning streak, but at least things were looking brighter at the end of the 2007 season.  The optimism that accompanied the 2008 offseason would continue for a while into the 2008 season before it would be crushed utterly.