Share All sharing options for: Race, Auburn, and Gene Chizik 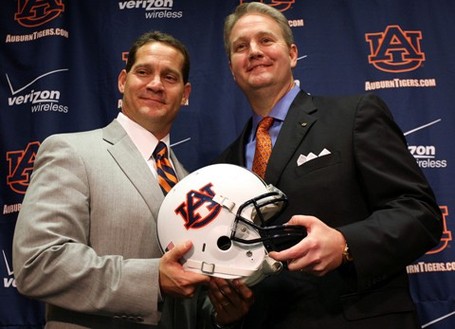 Here in Alabama, there has been a lot of talk on the radio about the "race card" in the Gene Chizik hiring.  Obviously, any time someone suggests race is involved, things get passionate on both sides.  Strangely, as far as I know, I was the first person to play the "race card", and I don't think anyone noticed:

And just to throw this out there, I think the Black Coaches Association will and probably should make a big stink over this hire.  Not all hirings of white coaches are offensive, but when a retread like Gene Chizik gets a big pay raise after failing at his previous job, while coaches like Turner Gill and Dewayne Walker are passed over, they have every reason to complain.

It was an aside in a longer post talking about the problems with this hire, and I still agree with the sentiment.

One of the problems I think we have in talking about race in sports is that our vocabulary on the topic is too limited.  Everything is either a) racist or b) not racist.  Either the people involved were motivated by race or they were not.  I tend to think of it in more complex terms than that.

It's not just a matter of whether or not Auburn officials deliberately passed over a black man because he was black.  For the record, despite some noise to the contrary, I am personally very skeptical that Turner Gill's white wife had anything to do with this or that the Auburn front office was in any way influenced explicitly by the races of the people involved.  For what it's worth, I have never perceived Auburn as having a race problem above and beyond that common at other similar schools around the South.  For example, Auburn was an "early adopter" when it came to black quarterbacks, giving African-Americans like Patrick Nix a chance to play the quarterback position when a lot of schools still weren't doing that.

The problem is not that of overt racism, but of being passed over because of facially racially neutral hiring criteria that actually correlate with race.  Unless you believe that Auburn's hands were tied by Jimmy Sexton, the only thing that makes sense about the Chizik hiring is that they wanted to hire an "AUBURN MAN" and that they went out and got him.  They didn't select for race, but only for "AUBURN MAN", by which I mean someone who can chew tobacco and butt heads with Pat Dye.

The problem is that in limited their search criteria so much, they essentially excluded all African-Americans from the process.  Nevermind that it's incredibly stupid to limit your coaching search in that way, as they should know because it has come back to haunt their biggest rival whenever they tried to do it themselves.  Mike Dubose?  Mike Shula?  The problem is that in not seeking out "the best guy", and seeking only "the best Auburn man", they cut out dozens or even hundreds of coaching candidates who would have been better choices than the one they picked, some of whom would have been people of color.  Yes, they interviewed black candidates, but in the end, they decided that "AUBURN MAN" was the #1 criterion and the black candidates didn't pass the first cut.

This is the same reason that race is an issue whenever a company hires the boss's child.  Because the head man is probably white, this has the effect of selecting for race even though it superficially does not select for race.  It doesn't select for race, but only for familial connections (to a family that just so happens to be white).  The same is true here.  They didn't want a "white man".  They wanted someone with familial connections to Auburn.  It just so happens that very few black men with head coaching credentials have those familial connections.  It's not exactly racism, but the effect is the same.  Black candidates are excluded regardless of objective qualifications.

So what happens is, because Auburn hired coach with a terrible track record to be their head coach, passing up tons of better-qualified candidates (both white and black), Auburn bought themselves an ugly media story that has been picked up by everyone.  They earned it by being so narrow-minded in their selection criteria.  Had they hired a coach on their level, white or black, they would not have this problem.  They could have hired Gary Patterson, Jim Grobe, Gary PInkel, or any of dozens of qualified white head coaching candidates and no one would have called it racism.  But hiring an unqualified white coach over qualified African-American ones raises a big stink.

I think this effect largely explains the lack of African-American coaches at the head coach and coordinator level.  Black candidates aren't systematically excluded, but they are effectively excluded by the narrow but superficially race-neutral criteria that the hiring committees use.  And that is a valid racial issue that needs to be pointed out and discussed.