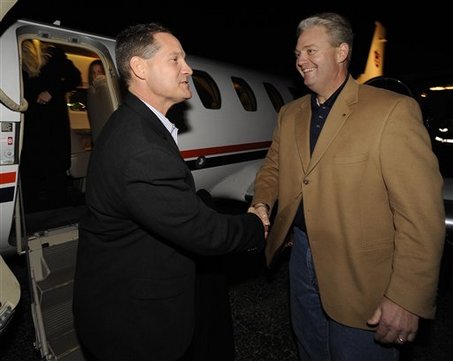 This whole thing has been a fun little diversion during a week when there was really little to talk about other than coaching rumors, which I don't particularly care to get into the day-to-day of.  Anyway, today we look at Gene Chizik's fifth win as a head coach:

This is another revenge game for the Cyclones.  Kent State had beaten Iowa State 23-14 to ruin Chizik's debut the year before.  Obviously this one meant a lot to the boys.  Despite the extra motivation to beat the Kent State Golden Flashes (small teams have such colorful mascots, don't they?  We've seen the Golden Flashes and the Jackrabbits so far.), Kent State jumped out to a 7 point lead early in the first quarter thanks to a fumble by the Cyclones' quarterback.

Iowa State was undeterred, however, and scored 3 touchdowns in the final 5 1/2 minutes of the first quarter to take a commanding 21-7 lead thanks in part to a strange 42 yard loss on a 3rd down play and a subsequent blocked punt.  I can't explain it either.  The Golden Flashes got one of those touchdowns back in the second quarter to cut the lead to 21-14, but never got closer than that.

As is often the case, turnovers caused all the problems for Kent State.  Four on the day led to most of ISU's points.

This was a pretty ordinary win over an overmatched opponent, but it gives us a chance to go over Gene Chizik's records at Iowa State:

That's a record of achievement that is hard to match.  Beating it is easy.  Matching it is hard.

So, I had a bit of fun at Auburn's expense, and at Gene Chizik's expense, but let me be clear.  I don't hold anything against Gene Chizik.  It's not his fault he's been promoted well beyond his achievement level.  He was an excellent defensive coordinator, but lots of good coordinators fail when promoted to head coach.  Chizik is one of those.  The problem is that Auburn saw fit to promote a failed head coach to a bigger job.  That's their mistake and they deserve what they get for it.  At least, their administration deserves what they get for it.  The players don't deserve it.  The fans don't deserve it.

Yeah, I hate Auburn as much as any sensible person would, but I subscribe to the theory that in the end we're all just rooting for laundry.  We root for the guys wearing the right colored clothes, and that's all there is to it.  I'd rather not see the Auburn fans who care as much about their color of clothing suffer like this, in this agonizingly slow and painful way.  I'd rather just snap their hearts in two with another last-minute touchdown.

This is going to be a long offseason for Auburn, and the negativity may abate some, but it won't go away unless and until there is real achievement on the field.  That won't happen for another 8 1/2 months.  At least Auburn will have some early returns.  They open the 2009 season with West Virginia, and then host Mississippi State, Kentucky, and then Ball State.  There's not a whole lot of warm-up there.  If they don't come out of that stretch at least 3-1 you will probably hear a deafening roar for Chizik to be fired.  I doubt Auburn will be able to resist that pressure at that point, after such a bad offseason.