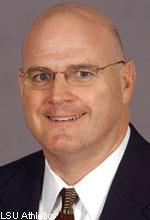 First of all, many apologies for an embarrassing error that was pointed out in comments yesterday.  For those of you wondering, Patrick Nix is not black.  Anyway, on to the post.

We call a slight audible this morning, as I had planned on publishing the 4th and final edition of the Recruiting Update.  Part 1 was a rundown of the last 3 commitments to the Tigers.  Part 2 looked at the players we are widely expected to sign, yet who remain uncommitted at the moment.  Part 3 looked at who we really want to sign of the remaining players.

We go another direction this morning, however, as it was announced last night by various outlets that LSU co-defensive coordinator and linebackers coach (and former special teams coordinator) has accepted a job offer to be the head coach at Northwestern State University in Natchitoches (a word I always struggle to spell).  He will continue coaching at LSU through the bowl game.

Peveto's reputation among the LSU fans took a hit this year with the struggles on the defensive side of the ball after he was elevated to co-coordinator along with defensive backs coach Doug Mallory.  While Peveto may or may not have contributed to the problems the defense had (it is disputed how much responsibility he really as a co-coordinator), we should be very clear that Peveto was an excellent linebacker coach and recruiter.  He was, in fact, one of Miles' primary recruiters along with running backs coach Larry Porter.

This year alone, Bradley Dale Peveto was responsible for the recruitment of 5-star commitment Janzen Jackson, 4-star commitments Drayton Calhoun and Michael Brockers, and 3-star commitment Kevin Minter.  Three of those guys are out-of-state recruits, and Peveto has a lot of success in that avenue.  He was particularly effective in recruiting Georgia and Texas.

For what it's worth, I think losing Peveto as a recruiter and a linebackers coach is a big blow to us.  Even with the expected changes in the coordinator position, I would have liked to keep Peveto on as position coach.  Players and recruits love him.  But he is getting that head coaching job that coaches always want.  It's a bit less high-profile than being a position coach at LSU, but he can parlay it into a bigger job if he has success there.  He's been at Northwestern State before, as a defensive coordinator, and obviously likes it there.

This gives a good jumping off point for discussing the coaching rumors.  Peveto is not expected to be the last coach to leave LSU this offseason.  The other co-coordinator, Doug Mallory, has been offered a job at New Mexico State and is expected to take it.  Earl Lane is widely rumored to be heading to Florida-Atlantic when our season concludes.  No word yet on Joe Robinson's destination, but it is also widely expected that he is seeking other employment.

Les Miles is proving to be just as reticent in talking about coaching changes as he is about talking about player injuries (just as a reminder, Andrew Hatch has been "day to day" since mid-October when everyone knows he broke his leg).  He refuses to discuss staff changes or admit that he's been looking around for new defensive coaches for weeks now. 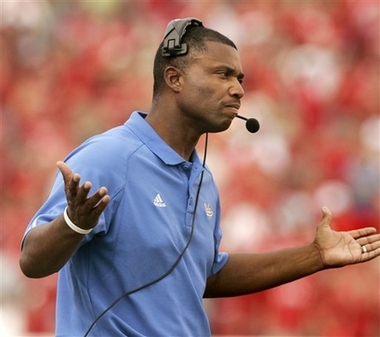 Earlier this week, it appeared that LSU was looking to get Dewayne Walker from UCLA as defensive coordinator, Ed Orgeron as defensive line coach, associate head coach, and recruiting coordinator, former Auburn linebackers coach James Willis as linebackers coach, and maybe giving the defensive back coaching job to former LSU star and NFL veteran Corey Raymond, who has spent the last couple of years on the staff as a strength and conditioning coach.

Dewayne Walker has an outstanding reputation as a defensive coordinator, and is a rising star in coaching circles.  He's a hard-nosed coach whose attitude is probably closer to that of Vince Lombardi than of Les Miles.  He would be a good complement to Miles' laid-back demeanor.  His UCLA team did not have a good defense statistically, but the general consensus is that the points given up by UCLA were more a result of a lousy offense putting them in bad positions than anything else.  I can't say I know a lot about his UCLA defense other than hearsay (which says that he plays a very aggressive style), but it is generally believed that if LSU were to hire Dewayne Walker it would be a home run hire.

It is still questionable that Walker would accept the position if offered.  It is no secret that Walker wants a head coaching position.  He has struck out in his bids for them so far, and the positions around the country are rapidly filling.  He may want to hold out for the last couple of openings, however.  Also, he has spent his entire college career on the West Coast, and one wonders if he would want to begin again in the South.

As a recruiter, he has done a very credible job at UCLA, but of course he recruited almost exclusively the West Coast, and almost all of the commitments that Rivals lists him as responsible for came from California.  I do not expect that LSU is looking to open up California as a recruiting base.  However, I think it's fair to say that he would do fine as a recruiter here in the South, because it's not like he has had a long college career building contacts that aren't transferable.  He has only been a college coach for 4 years. 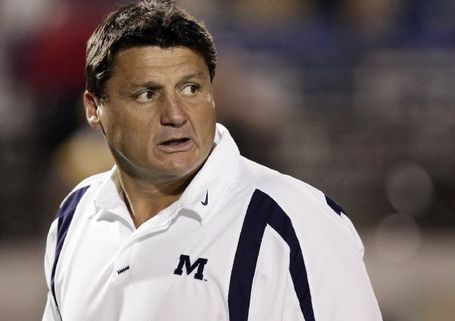 Of course, I believe (like most of you) that Ed Orgeron would be a great hire for LSU to coach the defensive line.  He is both an outstanding defensive line coach and an outstanding recruiter.  No offense to Earl Lane, but he would be a big upgrade as a coach, and he would replace (and perhaps exceed) Bradley Dale Peveto as the primary recruiter among the defensive coaches.  We all made light of him a bit as a head coach at Ole Miss, but the man is probably the best defensive line coach at any level, and he is a magnetic personality and a tireless recruiter (a wonderful combination).  Hiring him for this position would immediately make the team significantly better. 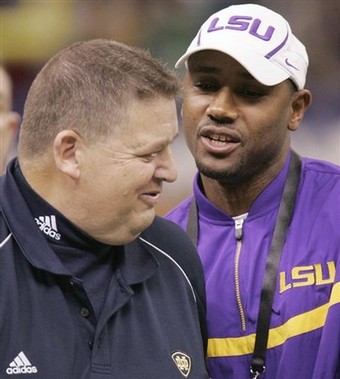 After spending a ton of money to get a rising star defensive coordinator, and a ton of money to get the best DL coach in the game, it only makes sense that LSU would have to fill the linebacker and DB coach positions with younger, presumably less expensive guys.  Corey Raymond has never been a position coach or had recruiting responsibilities, but he would be eased into the job because of Walker's background in coaching defensive backs.  Raymond is obviously highly thought-of by the staff and it is reported that he had legitimate game day responsibilities despite only being a strength and conditioning coach.  I have no problem with giving the guy a shot.

James Willis was a great linebacker at Auburn, and he is generally well-regarded as a linebackers coach:

Was confirmed this morning that all assistants were told to 'look for employment' during a meeting last night.....including James Willis.  The only assistant that was actually GOOD at his job.  The loss of Willis is a TERRIBLE mistake.  He's a good coach and a fantastic recruiter.  Let the stupidity begin.....

Link here.  Also, read the comments to that post.  They are very complimentary.

He let go all the coaches and as of yet has not hired one replacement, which brings up one point that really ticks me off, why not keep Willis? He is an Auburn man who was still recruiting his tail off and he adds at least one more warm body out there making contact with these recruits.

Link here.  Again, the comments are also very complimentary.  I can't say that I know a lot about the guy, but if he's beloved among the fans of the school where he currently is, that's at least very encouraging.  Plus, Auburn's linebackers have been pretty darn good.  Willis has been coaching linebackers at Auburn, Temple, and Rhode Island.  He seems to be a really solid guy.

As a recruiter, the above posters are very high on him.  Looking at his Rivals page, it is clear that he struggled getting top recruits as Auburn struggled getting top recruits.  He appears to have been assigned to recruit Alabama and Mississippi, and he has gotten some 4-stars and some 3-stars, but I don't know if you can say he is really elevating their classes.  His success in recruiting seems to rise and fall with the success of the program in general, which is to say it's been a struggle of late.  At least he's putting in the effort, and while he'd be a solid recruiter, I don't think he is quite at the level of a Peveto in that regard.

I don't know if any of this will come to pass.  The rumors seem to be constantly changing.  This latest round seems to have some legs, and at least we have official confirmation that SOME changes will be made, but there's no telling if any of this will hold up.  We'll know more in a couple weeks, I guess.