Basketball Steps Up In Class

Share All sharing options for: Basketball Steps Up In Class 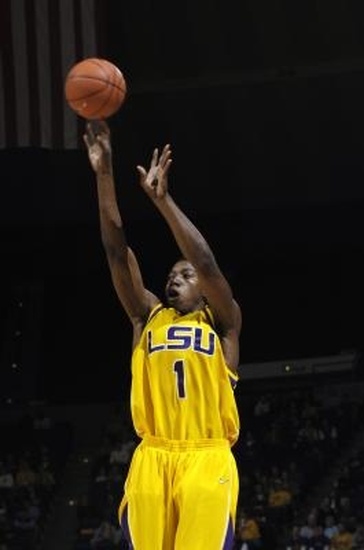 The 8-0 LSU Tigers basketball team has to go on the road today to take on the toughest challenge of the year so far.  They head to college station to take on the 9-1 Texas A&M Aggies, who have taken on and beaten some pretty solid teams.  In back-to-back games, A&M beat Arizona and Alabama.  Neither of those teams are outstanding, but they're much better than anyone LSU has faced this year.

They are led by Josh Carter, a 6-7 swingman who takes a lot of 3 point shots and averages a pretty impressive 1.46 points per shot.  Guard Donald Sloan also averages in the double digits in points.  Bryan Davis is the main inside presence for this team at 6'9" and 240 pounds.  He may be too much for our skinny post-defenders to handle.

I'm not a basketball expert by any means, but nothing about this team really stands out at me.  They usually score in the 60s or 70s, but sometimes get higher than that.  They seem to play tough defense.  They use their bench a fair bit, with 9 players averaging double-digit minutes.  Their best scorers shoot free throws very well.  There is no player on the stat sheet who really stands out.  No Stephon Curry here.

This is really my first look at LSU basketball, and there are some things to like.  Did you know that Bo Spencer is shooting over 50% from the 3-point-line?  And it's not in a small sample.  He's attempted 31 and made 16.  Chris Johnson is not firing up 3-pointers like he did all last year.  We don't have anyone who seems to be getting into foul trouble either, but then again with the patsies we've played we have used the bench liberally, with no LSU player averaging more than 27 minutes of playing time per game.

Unfortunately, this game will not be on television, which is a darn shame.  It's the first game we've played that I would have thought would be televised.

Much has been made of the weak schedule, and I can't say I approve of how we've done this.  I know you have to play some tune-up games, but you need to be challenged a little to actually tune up.  Tuning up is more than just playing a game against the local high school.  But after the initial 8 game stretch, things do sort of get a little tougher, starting with this game.  Next week we play Washington State and then we play Utah right before conference play opens.  There are games against McNeese, ULL, and SLU mixed in there, but at least it's an improvement.

I wish I could see this one, but we will have to wait until the Washington State game to get a real look at this team, as that game is televised on ESPN2.  This is why I need a dedicated basketball writer, people!