The Great Media: Curse of the Cat People

Share All sharing options for: The Great Media: Curse of the Cat People 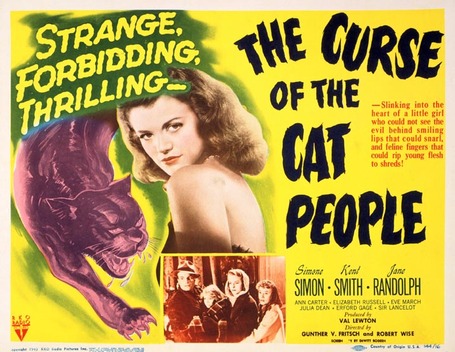 This is the first edition of The Great Media of the 2008-2009 offseason, and I know this is a very peculiar choice, but stick with me on it for a little while.  Curse of the Cat People was produced by B-movie legend Val Lewton, who had a great reputation for making well-made and creepy horror movies on the cheap.  RKO Radio Pictures kept him in-house and made a tidy profit off of his best works like The Cat People and I Walked With a Zombie.

Lewton believed that you did not have to sacrifice quality to make a movie on a budget.  His movies tended to be well-acted and creepy, sacrificing shock-value and substituting suspense in order to cut down on special effects budget.  He's not a household name like Billy Wilder, David O. Selznick and the like, but I think he's one of the most interesting movie producers of his era. His movies were marketed as shlock, but they stand the test of time and remain beloved today.

Which brings us to Curse of the Cat People, which is in my opinion Lewton's best movie.  But it's a peculiar movie.  Lewton wanted to break out of the horror genre and make a touching little movie about a lonely little girl, but the studio interfered.  They insisted that his next movie be named Curse of the Cat People to capitalize on the success of his earlier monster movie about a woman who turns into a panther and kills people.

The problem was that the movie Lewton planned was not similar in plot or in tone to The Cat People, but he had to obey his corporate masters, so he tacked on a connection.  In The Cat People, Oliver Reed is married to Irena (pronounced ee-RAY-nuh), an Eastern European immigrant with a mysterious past.  She goes a little crazy, turns into a cat, kills a man, and ultimately kills herself.  He falls in love with another woman, Alice, along the way.

When Curse of the Cat People begins, Oliver Reed is married to Alice and they have a 5-year-old daughter, Amy.  Amy struggles in school because she is shy and seems to spend her time daydreaming.  Her father encourages her to make new friends and stop living in a make-believe world.  Amy tries, but the initial results are not encouraging.

Oliver and Alice are struggling with the memories of what happened with Irena.  Oliver, for one, cannot seem to put behind him the tragedy of his first marriage.  Keep in mind, he was happily married to Irena before she murdered someone and killed herself.  Oliver keeps Irena's artwork around the house, as well as pictures of her, semi-hidden.

Amy strikes up a friendship with a female apparition, played by the same actress who played Irena in the prequel.  As Amy is otherwise friendless, she values this relationship.  The woman offers Amy advice and plays with her.  Amy discovers a picture of Irena in a drawer in the house and asks Alice who it is.  Alice explains that her name is Irena, but says little else.  Amy goes to the place where she meets her friend and calls out "Irena! Irena!"  The friend returns and says, "You called my name." 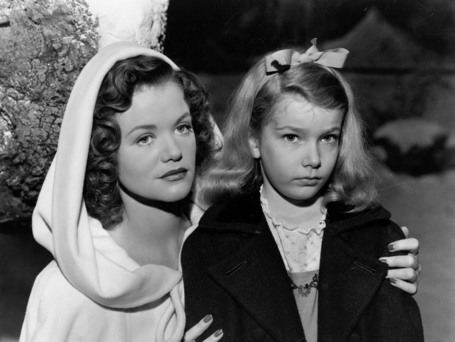 The ghost of Irena with Amy.

Oliver eventually learns that Amy has not been avoiding her world of make-believe, but has instead gone deeper into it (or so he believes).  He gets terribly angry with Amy, and his words hurt her.  The climax of the story is Amy leaving the house during a dangerously cold night and going alone into the woods.

I won't give away any more of the main story than that.  While it shares some characters and some minor plot elements with The Cat People, it is entirely its own movie and can be appreciated without any knowledge of what happened in the original, though some scenes may appear peculiar, particularly Irena's artwork involving cats.

What I like about this movie is how much it leaves to the imagination.  At no point does it reveal whether or not the ghostly Irena was actually real or a figment of Amy's imagination.  It is perfectly plausible that she was imaginary, Amy was a lonely girl prone to daydreaming.  The picture she finds looks like her friend, but that could have been "back-filled" by her imagination after seeing the picture, and the ghostly Irena never gives herself a name until after Amy has already decided that she is Irena.  She never finds out about the events of The Cat People, and the ghostly Irena is entirely benevolent towards Amy, rather than being the murderous psychotic she was in the prequel. 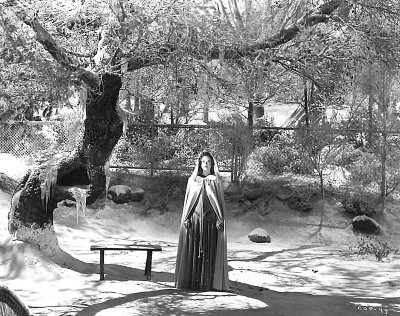 On the other hand, because this movie exists in the same world in which it was possible for a woman to turn into a panther, we cannot completely discount the possibility that the same woman could exist as a ghost after her death.

It is marketed as a monster movie (see above), and while it has some creepy and fantastical elements (a subplot about an elderly woman who insists her daughter died at 6 years old and that the woman claiming to be her daughter and living with her is an impostor is particularly chilling; is the woman right, or is she suffering from dementia?), it is really a character study about a lonely and sad little girl who is trying to figure out how to get along with her family and other children her age.

It is well-shot, well-acted, and very intelligently done.  Despite the fact that the connection to The Cat People was forced on Val Lewton, I do not believe it hurts the movie.  I think it adds to the suspense and the magic of this movie.  We know that the supernatural is possible because of what happened in the original movie, so we as viewers must be on guard for the possibility it will happen here.

Because of the peculiarity of this movie, and because of its grossly dishonest marketing campaign, it was not a success commercially at the time.  It got bad word of mouth from audience-goers who expected to see a monster movie, and it failed to draw in more serious movie-goers.  It remains vital today, however, and can still be seen on Turner Classic Movies.