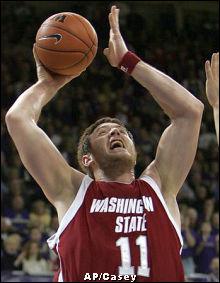 This guy had a tough night.

That was a fine win for the Tigers.  Really.  It was an exciting game against a quality opponent, an opponent that should have been able to handle us, really.  Washington State is a team who has a 6'10" 245# center who has skill.  He should have been able to push around our guys and score at will.  Instead, he got called for two quick fouls and was never really a factor in the game.

Even so, the Cougars' stifling defense held us to 4 points through the first 8 1/2 minutes of the game.  Despite Aron Baynes playing only about 2 minutes of the first half, LSU only had a 25-23 lead at halftime.  Still, when Baynes WAS in the game, and when they got the ball to him, he scored pretty much at will, and it is clear that had Washington State been able to keep him on the floor they could very well have won this game.

But I'm getting off the subject.  This was a nice win, the first resume-builder of the year for the Tigers.  As usual, we did it mostly with guard play, as Bo Spencer and Marcus Thornton combined for 37 of our 64 points, and small forward Garrett Temple got 13 of the rest.  That means that our starting frontcourt and our entire bench combined for 14 points, 9 of which were from Tasmin Mitchell.  It will be hard to win games that way, but it got this one.

This was also the first time I really got to watch the basketball Tigers this season.  While our bench scored only 3 points, I was pretty impressed with how Quentin Thornton, Storm Warren, and Chris Bass played.  None of them were offensive forces, but all provided solid defense and rebounding while giving the starters a chance to rest.  Heck, Thornton looked better than Chris Johnson out there if you ask me.  Quentin Thornton's never going to be a big scorer, but the freshmen could develop their games a little as the season presses on.

We won this game with defense.  We were losing comparatively big with about 6 minutes to play, but the defense clamped down and forced a lot of turnovers and transition baskets by Thornton, Spencer, and Temple.  These easy baskets and some big 3 pointers got us the win.

I was particularly impressed by Spencer.  This kid was kind of an afterthought last year.  He neither created offense nor scored much himself.  This year he is doing both.  He's like a completely new player out there compared to last year.  I wonder if it's just him maturing as a player or if Trent Johnson worked some magic on him.  Garrett Temple also appears to be thriving in his new role as a 3-man rather than a point guard.  He always looked slow and tentative running an offense, but he looks smooth and comfortable playing on the wing.

If Chris Johnson can ever re-discover his scoring touch (wasn't he a three-point specialist a couple years ago?), this will be a dangerous offensive team.  It appears we will forever struggle with skilled big men, but that's been true since the Final Four season when Big Baby and Tyrus Thomas were able to combine to stop them.  Fortunately, it's not like a whole lot of teams in the SEC have great big men.  There are a few, though, and we will be facing teams feeding it inside all year.  We might as well figure out what to do about it.

I think this team needs for Terry Martin to come back.  We need someone on the bench who can score, and right now Terry Martin is the only one.  He is so far in the doghouse that he is not even dressing out for games.  Let's hope that Trent Johnson wins this little power play and that Martin returns ready to play like he should.

I think that I am going to enjoy getting to know this team a little better.