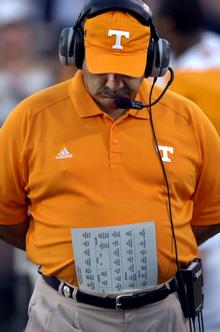 They picked a bad time, blog-wise, to announce the hiring of John Chavis.  I had really planned to let this slide until after the bowl game, but decided to go ahead and get my thoughts out there.

I'll be honest; I wanted Dewayne Walker.  Walker was the sexy pick, a minority hire out of the West Coast with a reputation as a rising star in coaching circles, and a good recruiter to boot.  I'm not bothered by coaches who appear to be on the way out the door once they're in the door, because if he gives you two great years and then bolts for a promotion, at least you got the two great years, and there's nothing in the world stopping you from hiring someone else.

I got John Chavis, who is kind of a boring pick.  He's an old guy who's risen as far as he will likely go and he is an indifferent recruiter.  Yes, he may be a very attractive man, but that's no reason to hire him.  He's not a fresh face, and no young recruits are going to be energized by this pick.  Yes, initially there is a little twinge of regret, but let's take a quick look at the product Chavis puts on the field.

His Volunteer defense was 4th in the nation in total defense last year, despite having an offense that could not stay on the field.  I'll let noted Vols blogger Clay Travis take it from here:

Let me be succinct: great hire for LSU. Last year Tennessee's defense gave up 14touchdowns while on defense. Let me repeat that, 14. That's despite Tennessee's offense consistently putting the defense in the worst positions on the field. I'm in the process of reconstructing how many of those 14 touchdowns were on drives of 30 yards or less. At least two of those touchdowns were on drives that began, thanks to our woeful offense, inside the UT five yard line (Wyoming and South Carolina.)

From LSU Sports Palace, Chavis's defenses ranked 10th, 61st, 33rd, 16th, and 37th nationally the last 5 years in scoring defense.  And that is without really a tremendous amount of talent on the field.  Good talent, but not great talent.  The talent Chavis has to work with at LSU will be at least as good as what he's had at Tennessee the last few years.  That's a really good track record of putting good product on the field.

Back in 2004, Poseur and I were discussing the LSU hiring of Les Miles among some friends.  Not everyone was thrilled with the hire, and I was reserving judgment.  Poseur said of it (paraphrasing), "This is the kind of hire that will keep us at the top.  It may not be a splashy hire, but now that we're at the top he will be able to keep us there."  This past year notwithstanding, he has been exactly right, and I think the same conclusion is due of this hire.

Now it is true that LSU will likely be losing two of its best recruiters in the shakeup on the defensive coaching staff, and those recruiters will have to be replaced with other strong recruiters, but when you're talking about the coordinator of one side of the ball, it is essential that you get the X's and O's right.  There are still some position coaches to hire, and if the rumors are true that Ed Orgeron in about to be named as DL coach, that's a prime recruiter right there.