There Is a Game To Be Played Today

Share All sharing options for: There Is a Game To Be Played Today 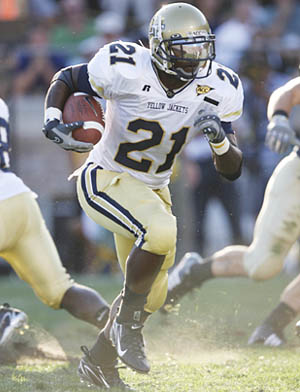 I swear I desperately wanted to stay out of the coaching changes story this week, but unfortunately it seems to have dominated the week's storylines among LSU fans, myself included.  With the almost-official hiring of John Chavis and the heavily rumored imminent hiring of Ed Orgeron, it has been almost impossible to ignore this story.  I could have, but I would be doing a disservice to you, the loyal reader.

At least I managed to stay away from recruiting this week, even though there is much to discuss.  This is a HUGE recruiting weekend for LSU, rivaled only by Junior Day, which happened over 3/4 of a year ago.  More on that another day.

It's sadly been very easy to overlook that we have a football game to play, against a very good team no less.  We have a virtual road game against a higher-ranked opponent.  Not only that, but LSU and Georgia Tech played two common opponents,  Mississippi State and Georgia.  Tech was 2-0 against those teams, by margins of 38-7 and 45-42.  LSU was 1-1 against them by margins of 34-24 and 52-38 (against), respectively.

I've said already that I think the long layoff and longer preparation time favors LSU in this matchup.  Les Miles has always managed to have LSU playing its best in bowl games, and the long preparation helps LSU prepare for GT's option attack a lot more than it helps Georgia Tech prepare for what we will throw at them.

What we do not know is how the team will respond mentally to the difficulties they have faced this season.  If the last few weeks of the season are an indication, the answer is "not well."  However, the last few weeks of the season may not be an indication.  I sincerely hope and believe that this senior class, particularly guys like Herman Johnson, Kirston Pittman, Tyson Jackson, Quinn Johnson, and Curtis Taylor, will want to do what they have to do to go out winners.  They're winners already, as every one of those guys was a key player on a national championship team (two national championship teams for Cousin Kirston).  Every one of those guys has had disappointment this year, but I don't think they want to go out like that.

That's to say nothing of juniors who may be considering leaving, like Brandon Lafell, Ricky Jean-Francois, Ciron Black, and Charles Scott.  I expect to lose at least one of those guys, and maybe 2 or 3.

As Legacy x4 said, the defense will have to play with discipline.  When Georgia Tech has played highly athletic teams like Florida State, Miami, and Georgia, their athletes consistently played without discipline and overran their assignments.  It is no coincidence that GT has struggled the most some of the less athletic teams like UNC, Gardner-Webb, and Virginia.  LSU is similar to those teams, but that does not mean our athleticism is a disadvantage.  It's a disadvantage if you rely solely on athleticism and aggression to the exclusion of smarts.  The key is to use your smarts to get yourself into the right position, then use your athleticism to make the play if you're called upon to do so.  You will not always be called upon to make that play, and as a defender you have to live with that.

The focus of the media attention has been the Georgia Tech offense versus the LSU defense, but I am equally curious to see how our offense does against the Tech defense.  It's no secret we have struggled offensively, and it may come as a surprise to some that Georgia Tech's defense has been very solid all year, but I think that if Jordan Jefferson's game has matured during the bowl practice, we could really make some hay on offense.

This will be a farewell game for lots of players and several coaches.  I hope it's a happy memory for them.  Game Thread later.