Share All sharing options for: Florida 31 - Alabama 20: An SECCG Retrospective 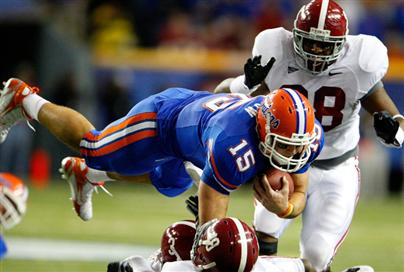 Someone was trying to tug on Superman's cape.

I don't like Florida very much.  After all, it's really hard to like Urban Meyer, whose antics on the recruiting trail come off as petulant, mean-spirited, and often fundamentally dishonest.  But he's put together a heck of a team.

I think Alabama played well.  They were pretty much at the top of their game.  They weren't intimidated by Florida at all, and they won the battles where they thought they needed to win them in order to have a chance.  Still, despite getting the power running game going and using Julio Jones to maximum advantage, Florida was still 11 points better despite being without one of their two best players.

Let's be honest.  A lot of games aren't decided by who is the better team, but rather by who is having the better day.  The inferior team wins a statistically significant percentage of the time in college football.  If a team's "quality" is considered its mean standard of play, there is often a very large standard deviation around that mean, to the point where a team's play on any given weekend is highly unpredictable, and a team with a lower "mean" may be playing above its head while the team with the higher "mean" will be playing below its standards.  The result is an upset, and they happen a lot.

Last night, both teams were playing at or near their mean, and Florida was 11 points better.  I think that's about right.  Not that Alabama is a bad team.  They surely are not, but Florida is just that much better.

Keep in mind, the closest game Florida has played since September was a 42-14 victory over Vanderbilt, in which Vandy scored two late touchdowns after falling behind 42-0.  Alabama played Florida tougher than any team has since this team found themselves after the loss to Ole Miss.  Florida's just that much better, even without Percy Harvin and without any backup defensive tackles.

Florida now is widely expected to go on to play Oklahoma in the BCSNCG, and that should be a very interesting matchup.  Oklahoma has done to the Big 12 what Florida has done to the SEC since their lone loss on the season.  Oklahoma has scored 35 points or more every time they've taken the field this season, and they've scored at least 58 points for 6 straight games.  It will be a high powered offense against a high powered offense.  It should be a lot of fun if Oklahoma doesn't lay an egg again.