College Football Does Not Have Coronations

Share All sharing options for: College Football Does Not Have Coronations 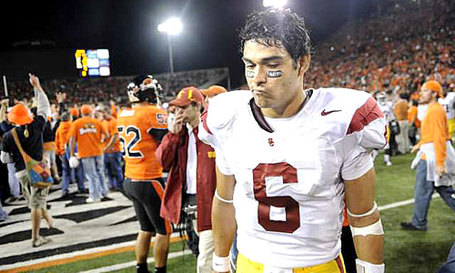 In case you missed it, USC lost last night.  The sound you're hearing is millions of college football fans cackling in maniacal glee because, let's face it, the only thing more fun than a star is a fallen star.

If you've ever wanted to know why I don't make predictions, last night's upset of USC by Oregon State is a perfect illustration of the reason.  No one would have thought that a team that lost to Stanford and to Penn State by a combined 39 points would be able to keep up with the team that pasted Ohio State.

But college football is a funny game.  One team can beat a vastly superior team if they play on an emotional high and if the superior team does not play their best game.  There are so many variables involving preparation, psychology, momentum, crowd energy, young players stepping up, and in-game injuries that can make for some very strange results.

I've heard it said, and I believe it, that a college football team can play over its head if it plays with emotion.  I've also heard it said that you can only do this about 3 times a year, because you just can't get up for a game more often than that.  The other 9 to 11 games in the season you better have a lot more talent than the other team, especially if this is their game to play with emotion.

Last night, we saw an Oregon State team that no one thought had a chance ride a wave of emotion and a career performance from a pint-sized freshman running back while benefiting from in-game injuries to two of USC's best defensive players, and get a big victory. 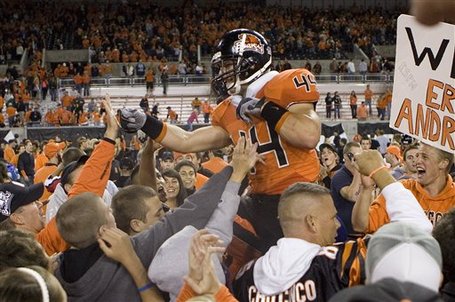 Yeah, there it is right there.

After the blowout win over Ohio State, many members of the media and fans as well wrote USC's name in pencil in the BCS National Championship Game.  A mere 12 days and 1 game later, their title hopes are in serious jeopardy.  Not only that, but with their weak-ass schedule (no games remaining against currently ranked teams), they don't figure to get a lot of slack from pollsters (at least not the ones who are paying attention)).

I'm not going to sit here and say Oregon State is better than USC.  They aren't.  If these teams played 50 times, USC would likely win at least 45 of them.  But last night they showed that the most talented team does not always win in college football.  Sometimes the night goes to the team that got more emotionally invested.

Oregon State was playing their most important game of the season.  USC was playing just another game, and they didn't get up for it.  They found themselves thoroughly outplayed in the first half and behind 21-0 at halftime.

USC found its game in the second half, scoring 2 quick touchdowns in the third quarter but couldn't keep up the energy.  They didn't score again until they had handed a touchdown to Oregon State on an interception.

Turnovers also play a huge role, and they are almost random.  USC committed 2 costly turnovers while Oregon State protected the ball.  OSU scored 13 points off of USC turnovers, including both of their last two touchdowns.

It's a funny sport, college football.  It seems as soon as a team starts believing it's unbeatable, it gets beaten.  These lessons are re-taught every year, but it seems no one ever fully learns them.